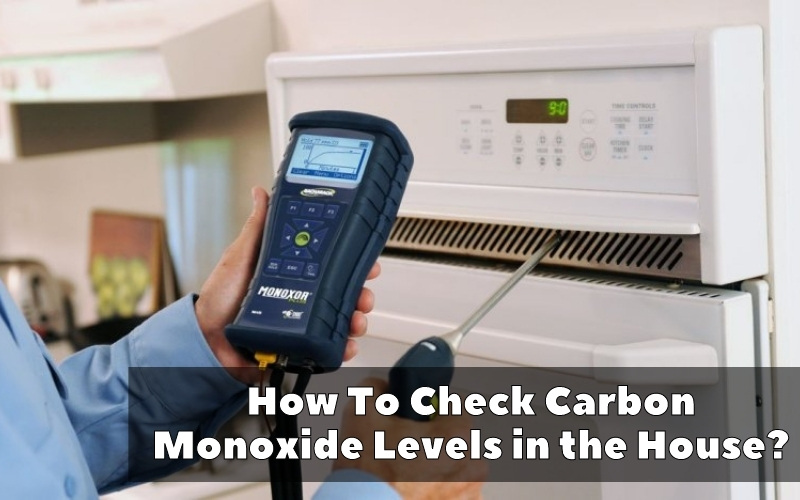 Also referred to as the ‘silent killer,’ carbon monoxide (CO) is a colorless, odorless gas that results from incomplete combustion. Inhaling high amounts of CO can lead to poisoning, which can cause chronic health problems or death. So, it’s essential to ensure that your home is carbon monoxide free, but how do you check CO levels?

Here are five ways to check carbon monoxide levels in the house:

Since carbon monoxide is a highly poisonous gas, it’s crucial to prevent its production and accumulation at home. This article provides essential tips on checking CO levels in your home. Therefore, read on to learn more.

According to the Center for Diseases Control and Prevention (CDC), about 430 Americans die annually from accidental CO poisoning. Moreover, 50,000 visit hospital emergency rooms, while 4,000 are hospitalized. Hence, it’s becoming essential for all homeowners to have CO-detecting devices in their houses.

A carbon monoxide detector is a device that detects unusual CO buildup in a space and sounds an alarm. Some people refer to CO detectors that produce a warning sound as CO alarms. And you’ll find several types of these devices in your nearest appliance store.

These gadgets resemble smoke or fire sirens in their working mechanism. Therefore, they let you know there’s CO leakage in your house since you can’t smell or physically see the gas.

The leading causes of CO in a house include:

CO detectors sense CO levels based on the Underwriters Laboratories safety standards. For instance, the alarm will go off quickly (in four minutes) when there’s a high CO concentration (above 400 parts per million). However, you’ll hear the sound after an hour if the levels are below 70ppm.

A person usually displays symptoms of CO poisoning after inhaling about 50 ppm over an extended period. Nevertheless, the signs can appear faster if the levels are above 400 ppm and can be fatal at 6,400 ppm.

CO detectors have a straightforward working mechanism that involves a silicon microchip, a CO sensor, and a plastic shell. So, when there’s CO leakage, the silicon sends a message as an electric charge to the detection chamber containing the CO sensor. Then, the sensor interprets whether there’s a high or low concentration of CO in your space.

If the level is above the threshold, the sensor will send another message to the microchip, triggering it to sound an alarm.

A detector’s extra features can enable it to have more functions. For example, some models have LCD screens to show a house’s status and levels of CO accumulation. Others comprise power indicators that produce distinct sounds when the detector’s battery is running low.

Three main types of CO detectors exist, and they include:

Note: The best place to install CO detectors is on the walls or shelves near the bedrooms. Then, place the detectors about 5-20 feet (1.5 to 6.1 meters) from appliances, including heaters, furnaces, and cookers.

Read: How Does A Gas Stove Work?

Although CO detectors are effective in sensing the presence of carbon monoxide, they aren’t always accurate. Conducting ambient air quality monitoring is a more reliable way of checking CO levels in your house. This test seeks to measure the presence and amount of pollutants in the surrounding air.

Although it mostly takes place outdoors, you can also use this monitoring approach to test indoor air quality.

Ambient air testers are the common tools that utility companies and firefighting departments use to conduct air quality tests. An air tester is more accurate than a home CO detector as it can sense trace amounts of the gas. So, it will alert you even when the CO concentration is at zero ppm.

Ambient air testers comprise a sensor that detects CO and a digital readout that displays the CO levels. These devices are relatively cheap and easy to use.

However, they have a few limitations, including:

Read: Is It Safe To Self-Clean Oven While Sleeping?

Using a pump-driven analyzer is another way to check CO levels in your house. This testing tool has an added advantage over an ambient air tester since it can test warm air currents and flue air products in addition to ambient air. Hence, it’s also effective in determining the source of CO leakage in a space.

Another advantage among some pump-driven analyzer models is that they produce graph measurements of CO levels. Therefore, you can print the results and have a professional analyze them to determine the air quality of your home.

Since CO results from incomplete combustion of carbon, combustion analyzers utilize sensors to show the levels of various gasses. The ratios of CO:O2:CO2 will tell how much CO an appliance produces. So, if your furnace has a high CO concentration, the CO percentage will be higher than the other two gasses.

Combustion analyzers come in handy when assessing the efficiency of building heating systems. Hence, the United States Environmental Protection Agency (EPA) requires HVAC technicians to have these tools when monitoring home air quality. Early detection of CO and the source of the gas leakage may save lives or prevent serious health complications caused by CO poisoning.

The only downside of using combustion analyzers is that they’re pricey tools. You’ll find that their prices range from $600 to $2000.

Read: Why Is Electric Oven Better Than Gas?

The final way to check your house’s CO levels is by looking out for any signs of leakage. However, this isn’t an accurate approach as it doesn’t accurately quantify the amount of carbon monoxide in your house. Moreover, it doesn’t utilize any tool or device, making it a less reliable method.

Nevertheless, you can also use it as a confirmatory method by combining it with a carbon monoxide analyzing device. The signs that show carbon monoxide leakage or accumulation in a house include:

Read: Why Gas Oven Turns On By Itself

Carbon monoxide is a poisonous gas that kills people silently if undetected. Therefore, one of the preventive measures for CO poisoning is detecting any CO leakage in a building. The two primary approaches to checking for CO include:

However, it would also help if you watched for any signs of CO leakage in your house.