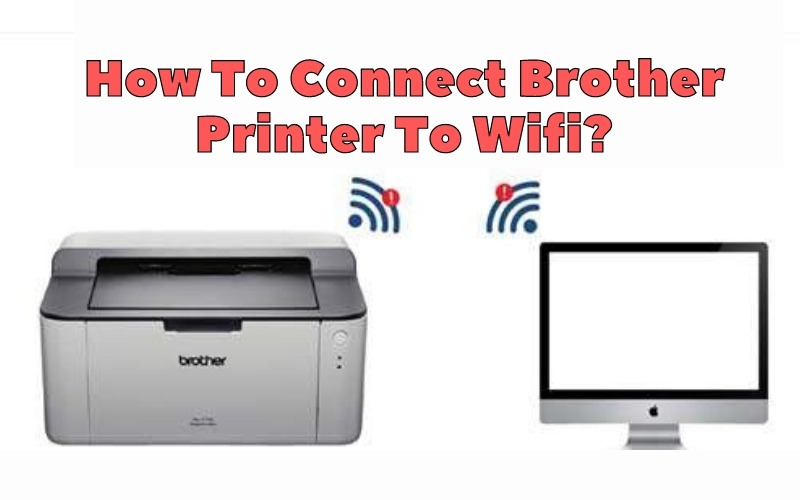 Brother printers have come a long way since the early days. Now, you can connect various Brother printer models to the WiFi network in your home or office, thereby sharing it across multiple devices. But how do you connect the printer to WiFi in the first place?

Before connecting your Brother printer to WiFi, you must know the WiFi network name and password. Then, search for that network through the printer’s control panel. Select the network and enter its password to connect the two together. Once the connection is established, test the connection by printing a document from a computer or other device.

Connecting your Brother printer to WiFi is pretty straightforward. This guide will walk you through each step of the process and help you troubleshoot any problems along the way.

How Do I Connect My Brother Printer To Wifi?

Connecting a Brother printer to your home or office WiFi network is very straightforward. You’ll only need about 10 minutes to connect the printer for immediate use.

One thing to remember is that precise steps might differ only slightly between printer models.

Still, connecting your Brother printer to your WiFi will involve these 6 steps:

The first step in this process is preparing your WiFi network and gathering crucial information about it.

Firstly, check that your WiFi router is turned on and working correctly. Also, be mindful of the location of the WiFi router relative to where you want to put your Brother printer.

The printer must be within the router’s signal range without any obstacles in between that might interrupt the connection.

Lastly, be sure to confirm two pieces of information:

You’ll need to know those two things later when modifying the settings on your Brother printer.

Read: Why Brother Wireless Printer Connected But Not Printing?

The next step is to prepare your Brother printer. Start by plugging the printer into a wall socket and turning it on.

Remember: you must ensure that your Brother printer is within your router’s signal range. A typical router has a range of 150 feet indoors, though that can differ between router brands and models.

Then, use the printer’s control panel to browse its settings. You’ll need to scroll through the menus to find the WLAN settings for your printer so you can enable it.

The WLAN feature on your Brother printer refers to Wireless Local Area Network. So that’s how the printer will find and connect to your WiFi router later.

Once you’ve successfully enabled the WLAN feature on your Brother printer, you’ll be ready to connect it to your WiFi network.

Read: How To Connect Your Air Conditioner To Wifi

After you enable the WLAN feature on your Brother printer, the device will start to detect all WiFi networks within its range. Those networks will appear on the printer’s control panel for you to scroll through.

You’ll likely only have one WiFi network in a typical household. However, the printer might also detect several different WiFi networks nearby.

That’s why you must search for the correct WiFi network based on the information you collected in Step 1.

When you find the correct network and select it, your Brother printer will begin connecting to that router.

Most WiFi networks will have passwords to prevent people from connecting to them without permission. You’ll often see that the password is often referred to as a ‘network key’.

When your Brother printer connects to your WiFi network, it’ll ask you to key in that password.

Network keys are typically alphanumeric (a combination of alphabets, numbers, and symbols). On top of that, they’re also case-sensitive, which means you have to be sure to enter the password exactly as it is.

After you key in the WiFi network password through your Brother printer, the device will begin connecting to the network. This part of the process usually takes only a few seconds, though it could take up to a minute in some cases.

Once you enter the correct password and the printer connects to your WiFi network, you’ll never have to enter the password again.

Read: Multiple Electrical Outlets Not Working? What To Check?

You can begin using your Brother printer as soon as you connect it to your WiFi network. At this point, it’s an excellent idea to test the printer to ensure it can print successfully, so you don’t get into trouble later.

The quickest way to test your printer is to print a sample document. The process is complete when you find that the document prints over WiFi without any problems!

What To Check If Brother Printer Won’t Connect To WiFi?

It’s normal to sometimes encounter issues when connecting your Brother printer to a WiFi network.

Here’s a quick list of items to troubleshoot if your printer fails to establish a connection:

Read: 4 Symptoms Of A Bad Home Thermostat You Need To Know

Below, you’ll find a few more questions and answers to help you with your WiFi printer setup:

How Do I Get My Printer On Wi-Fi?

Firstly, turn on your Brother printer and scroll through the menu on its control panel. You’ll find an option to enable the WLAN feature to search for all nearby WiFi networks. Select the network that’s yours, input your password, and the printer will connect to that Wifi network.

What Is The Difference Between Wi-Fi And Wireless Printer?

A Brother printer with WiFi capabilities can connect to your house or office WiFi network. Then, computers or devices on the same network can wirelessly send documents to the printer. However, some printers have wireless capabilities that allow them to connect directly to your computer instead of going through a WiFi network.

Can I Use A WiFi Printer Without The Internet?

Yes, you can use a Brother WiFi printer without an internet connection. That’s because the printer communicates with your computer through the WiFi network without going through the internet.

Does My Printer Need A Router?

Yes, a WiFi printer requires a router nearby. The router provides the WiFi network through which the printer and your computer communicate. However, a printer with wireless capabilities can connect directly to your devices without a router.

How Do You Connect A Printer To A Wifi Router?

There are two ways you can connect a printer to a WiFi router. The first method is to connect the printer wirelessly. Secondly, you can connect the router directly using a wired connection, such as a USB or network cable. Both methods will make your printer a part of your WiFi network, allowing you to print from any device on the same network.