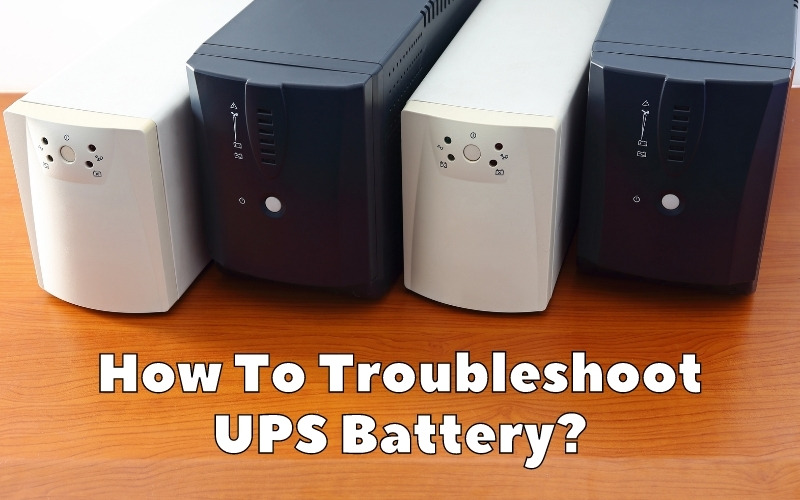 Uninterruptible Power Supply (UPS) units are pretty straightforward devices. They mainly consist of an internal battery that stores power and keeps it on standby in case of a blackout. However, these devices also suffer from common problems throughout their lifespans.

Some common UPS problems you’ll likely troubleshoot are a lack of output from the battery, a battery that doesn’t charge, a battery that discharges despite being plugged into a wall socket, and continuous beeping. Typical troubleshooting steps include checking for incoming power and replacing an old or faulty battery inside the UPS.

Troubleshooting a UPS might seem intimidating at first, but it’s easy when you know how. This guide will walk you through the troubleshooting steps for some of the most common UPS backup battery problems.

How Do I Troubleshoot My UPS?

Here are some of the most common UPS backup battery problems and how to troubleshoot them:

No Output From UPS Backup Battery

What’s happening: The primary purpose of a UPS unit is to supply your devices with battery power during a power outage. Doing so will protect critical equipment from damage and allow you to shut them down properly.

However, if you find that there is no power output coming from the UPS, it’s likely because there was no power input into the UPS.

Why this happens: There are 2 likely reasons why your UPS battery backup doesn’t receive the power it needs to charge.

Firstly, the UPS unit is not connected to a working wall socket. The UPS needs to be plugged into a wall socket that works and supplies the correct voltage. Without that, the internal battery cannot recharge and produce an output when necessary.

How to fix it: Firstly, check that you’re using a working wall socket. You can do so by plugging another device into that socket or moving your UPS to another wall socket nearby.

UPS Backup Battery Is Not Charging

What’s happening: The heart of any UPS is the internal battery. So when you keep the UPS plugged into a working wall socket, the unit will ensure that the battery remains fully charged until it’s needed.

However, there are situations where the internal battery fails to recharge. That will lead to the battery slowly discharging and being left without power to supply your devices during an outage.

Why this happens: There are 2 reasons why your UPS backup battery fails to charge.

The first reason is that the battery is old and worn out. UPS batteries typically last between 3-5 years. As they age, their ability to charge and store electricity gradually reduces. That will result in a lack of output from the battery during a power outage.

However, if your batteries are still new, this problem will happen due to a disconnected battery connector. So, even though you connected the UPS unit to a wall socket, the internal battery doesn’t recharge as it should.

How to fix it: The solutions for this problem are pretty straightforward.

If the UPS battery is old or worn out, you should replace it with a new one. Unfortunately, the old battery is not serviceable, so a replacement is your only option.

Before you do that, inspect the battery connector and ensure it’s not loose or has come undone. If it is, firmly connect the battery to the UPS unit, and it’ll begin to charge normally.

Read: How To Tell If UPS Battery Needs Replacing?

UPS Running On Battery Power While Plugged To Wall Socket

What’s happening: Your UPS should not discharge any power from its internal battery. At the same time, the unit is plugged into a working wall socket. However, suppose you find the battery draining even when it shouldn’t. In that case, there’s a problem with the incoming power supply.

Why this happens: Your UPS unit is designed to switch to battery power as soon as the incoming power supply becomes unstable or stops entirely. So, if the UPS suddenly switches to running on battery power, it’s because of one of these two reasons:

How to fix it: Firstly, inspect the circuit breaker for the wall socket, as it might have tripped. Switch it back to the ON position to supply power to the wall socket and the UPS unit.

If that doesn’t help, plug the UPS into another wall socket on a separate circuit. You might have to consult a qualified electrician to inspect your household or building’s electrical system.

When your UPS beeps one time every now and then, that’s a sign that the UPS is working normally. However, continuous beeping that comes from the unit is a signal that there’s a problem.

Remember: not all beeps mean the same thing. For example, the same UPS can beep continuously following different patterns to indicate a different issue requiring your attention.

Why this happens: Continuous beeping from a UPS typically means that the remaining battery power is too low, and you must shut the unit off immediately. You’ll usually hear this beeping when the UPS supplies backup power to your devices during an outage.

However, as mentioned above, not all beeping means the same thing. Some UPS brands and models have different meanings assigned to their beeping.

So, you should always refer to the user manual to see what meaning the manufacturer has attached to the beeping you hear.

How to fix it: Firstly, refer to your UPS user manual to confirm the meaning of the beeping you hear. At the same time, inspect the displays and indicators on the UPS front panel to confirm the problem.

Assuming the battery levels are too low, you should shut down your devices and the UPS unit as soon as possible.

Read: Why UPS Battery Gets Hot?

Below, you’ll find a few frequently asked questions to help you troubleshoot your UPS further:

How Do You Know If UPS Is Failing?

The first indicators that your UPS is failing will be the indicator lights and displays. These will flash to inform you that there’s a problem causing your UPS to fail. Besides that, you’ll also hear alarms such as beeping sounds that also happen when the unit is failing.

Why Is My UPS Light Blinking?

Most UPS units have several lights on their front panel. To understand why one might be blinking, check to see what the light is for. For example, a blinking light could mean the device is experiencing a problem with charging or overheating.

What Causes A UPS To Fail?

The most likely reason behind a UPS failure is the internal battery. That battery could be old or worn out. As a result, the battery will not perform correctly and might display physical symptoms like swelling.

What Is The Average Life Of A UPS Battery?

UPS batteries typically last from 3 to 5 years. However, the lifespan also depends on the quality of the UPS unit. Cheaper models will last 1 to 3  years, while high-end industrial models can last up to 13 years or more.

What Happens When UPS Battery Fails?

When a UPS battery fails, it cannot hold enough electricity to power your devices during a power outage. As a result, your devices will shut off immediately during a blackout, potentially suffering damage.