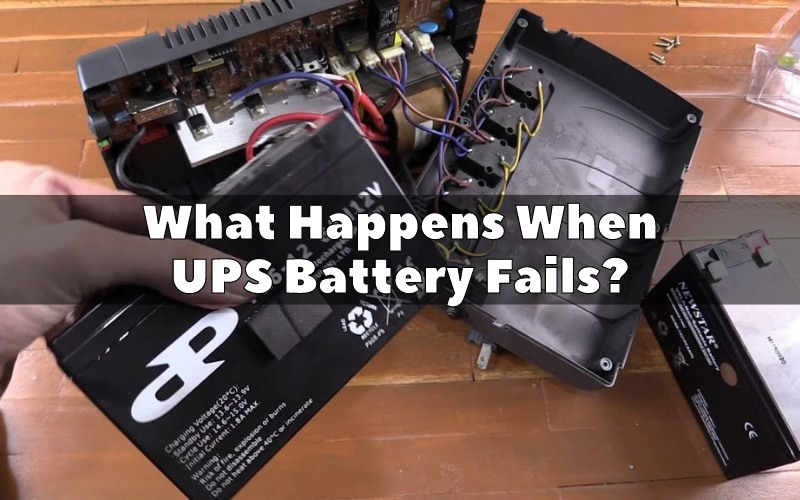 A UPS battery backup is a fail-safe that protects your devices during a blackout. When there’s an electrical disruption, the UPS battery will keep your devices running by supplying it with backup power. Unfortunately, UPS units can fail, and you need to know what happens when they do.

When your UPS battery fails, it won’t supply power to your devices when you need it the most, i.e. during a power outage. At the same time, the UPS unit will flash visual indicators like warning lights and audible alerts like beeping alarms to let you know that the battery is failing. Physical symptoms are also common, with batteries swelling or overheating when they fail.

As you read this guide, you’ll better understand what happens when your UPS battery fails. That way, you can recognize when a failure occurs and respond accordingly.

What Happens When My UPS Battery Fails?

Keeping your UPS battery in excellent working condition is critical to prevent it from failing. After all, the whole point of investing in a UPS is to ensure that there’s a backup power supply to keep your devices running during a power outage.

Still, it’s also crucial that you know what to expect during a UPS battery failure.

Here are 5 things that will happen when your UPS battery is failing:

Firstly, you have to understand that a UPS battery failure can be a silent problem that goes unnoticed for a long time.

That’s because the power outlets on a UPS will continue to work and provide power to the devices plugged into it, even if the internal battery is no longer functioning.

More specifically, those power outlets will continue to work normally as long as electricity is supplied to the UPS from the wall socket.

In other words, you could be using a UPS with a failed battery and not even realize it until later.

That’s why you must inspect your UPS battery from time to time. Doing that will help you find signs of battery failure early, so you don’t experience more severe battery failure outcomes like the other items listed below.

#2 Device Damage During An Outage

The whole purpose of investing in a UPS is so that there’s backup battery power to keep devices operational during a power outage. In doing so, devices like computers and servers can be shut down using the correct process, thereby preventing any damage.

That’s why one of the worst things that can happen when a UPS battery fails is that it cannot perform its primary task of protecting your devices from a sudden shutdown.

For many electronic devices, a sudden shutdown is very damaging. That’s because they’ll shut off instantly when there’s no power coming through the wall socket.

Sadly, you’ll only discover this sign of battery failure when it’s too late, i.e. when a power supply disruption happens.

Read: Why Is My Roomba’s Battery Not Charging?

UPS battery failures don’t necessarily happen all at once. Instead, batteries will deteriorate gradually over an extended period, resulting in a slow but certain performance loss.

For example, a UPS battery that’s aging and has experienced excess wear will see changes in its internal chemistry. As a result, the electrical resistance inside will continue to grow, and that will cause the battery to overheat more and more.

When that deterioration continues for long enough to the point of failure, the battery will produce so much excess heat that it’ll cause the entire UPS unit to overheat.

At that point, the built-in ventilation fans won’t be enough to keep the UPS and its battery cool, and it’ll be dangerous to continue using the unit.

Most UPS batteries will have flashing lights or other visual indicators to tell you they are failing. These lights or indicators can vary in how complex they are depending on the UPS brand and model that you have.

For instance, entry-level UPS units typically only have a few colored LEDs on their front panels that turn on when the battery fails.

However, more sophisticated models tend to feature small LCD-type displays that will provide you with much more information. For example, those LCDs can tell you much more about the battery failure with error codes that explain the root causes.

Aside from visual indicators, most UPS models also come with audible alarms. Typically, those alarms will play beeping sounds that are loud enough to catch your attention and warn you of a battery failure.

The beeping alarms on a UPS can also communicate several different things. For example, the occasional beep typically means the UPS works normally without any battery failures.

However, a continuous beeping sound is usually how a UPS warns you of an ongoing battery failure that requires your immediate attention.

Read: How To Reset Dyson Vacuum?

What Do You Do When A UPS Battery Fails?

When a UPS battery fails, you must replace it as soon as possible to enjoy the protection a UPS provides. In the meantime, however, the UPS can work without a battery.

Your devices will continue receiving power from the UPS as long as it’s plugged into a working wall socket.

But before you remove the failed battery, you must also resolve the root cause of its failure. That way, it won’t cause the new battery to fail the same way.

For example, a typical cause for a UPS battery failure is overheating. That can happen due to a lack of cooling or because the built-in ventilation fans have stopped working.

In that case, you must ensure that the UPS has sufficient cooling and ventilation so that the new battery doesn’t fail for the same reasons.

A UPS battery failure can be pretty damaging and expensive to you. So, here are a few more questions and answers to help you understand your UPS backup battery.

What Is A UPS Failure?

A UPS failure is when the unit can’t provide backup battery power to your devices during a power outage. In other words, the UPS unit fails when it can’t perform its primary function of protecting the devices you plug into its power outlets.

Why Is UPS Not Working?

A UPS can stop working for several reasons. Firstly, the UPS won’t work if its internal batteries are old or not functioning correctly. As a result, those batteries can’t charge or supply power to anything you’ve plugged into the UPS. Besides that, overheating or a tripped circuit breaker can also cause the UPS not to work.

How Do You Know If My UPS Is Failing?

Most UPS backup batteries will use visual or audible warnings to alert you of a failure. For example, flashing LEDs on the front panel and continuous beeping sounds are how most UPS units will tell you they are failing.

Yes, UPS backup batteries are very safe to use. However, you must ensure that the batteries in your UPS unit are in excellent working order. Old and neglected UPS batteries can swell and overheat, which can be dangerous for the UPS and anyone using it.

Why Is My UPS Battery Not Charging?