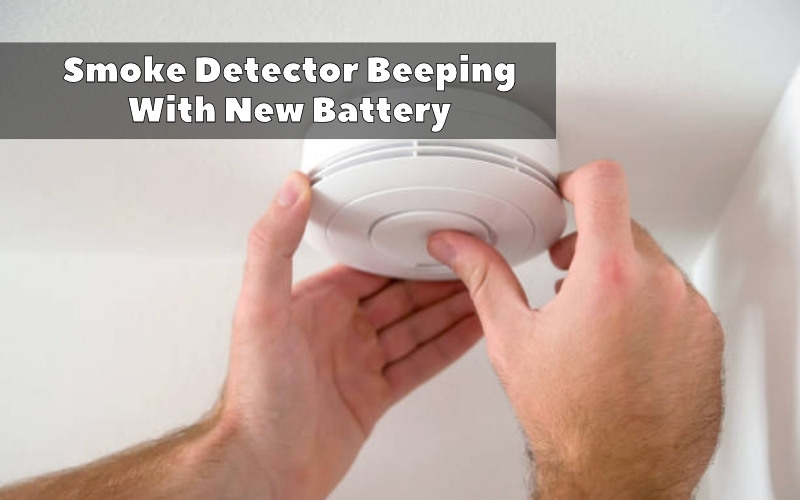 When you hear your smoke alarm beeping in the absence of smoke or fire, you probably think the battery has died and needs replacing. But what does it mean if the beeping continues after you’ve made the replacement?

If your smoke alarm is beeping even after replacing the battery, there is a problem somewhere else in the device that needs your attention. It could also mean that the old battery wasn’t causing an issue.

Thankfully, most of the issues that cause an alarm to keep chirping are an easy fix for homeowners. Let’s take a look at the most common problems and how you can fix them.

Why Your Smoke Detector Is Beeping With a New Battery?

There are various reasons your smoke detector is beeping despite having a new battery. I’ll discuss each of these reasons, as well as a few solutions below.

Smoke alarms are, unsurprisingly, very complicated devices. They utilize various sensors to detect hazards in your environment and when they are or aren’t receiving a sufficient charge.

In modern alarms, the system will recognize when the battery becomes too weak and send out a unique chirping pattern (the patterns vary between manufacturers, so check your owner’s manual). However, the signal can remain even after adding a new battery.

You can simply wait for the device to recognize the new battery. However, there’s no telling how long that may take. Instead, you can clear its memory with a hard reset. I’ll explain how to do this later on in the article.

If the beeping persists after a hard reset, the problem likely isn’t with the alarm’s memory.

Read: Why Is Garbage Disposal Smoking?

Dust Is Blocking the Detector’s Sensors

When we talk about dust’s threat to your smoke detector, the focus is usually on sensors. Blocked sensors will act as though they’ve been tripped and trigger the alarm. The solution here is to wipe the sensors.

However, dust can accumulate inside the device as well. Over time, it can hinder or even block the flow of power from the battery.

It’s hard to miss corrosion when you look inside your device. However, it’s impossible not to notice it when you change your battery.

Batteries inevitably leak over time. Their expiration date is in part an estimate of when this process will begin, but environmental factors can (and often do) make it occur sooner than expected.

Leaking chemicals create a flakey residue when they contact certain metals. You’ll often see it built up on the end of batteries or the battery contacts. This could be the culprit behind your smoke detector’s frequent beeping.

Where you install your smoke detector impacts the frequency of false alarms. For example, placing one just outside your bathroom will likely result in blocked sensors from a shower’s steam.

Proximity to your stove is another factor. It’s good practice to have a smoke alarm in your kitchen, but you should expect it to go off occasionally as your heat cooking oil or burn food.

These examples may seem obvious, but the impact temperature has on a smoke alarm is often misunderstood. Both ends of extreme temperature–hot and cold–can trigger a false alarm, even with a fresh battery.

High and low temperatures can negatively impact battery life, according to Duracell. However, extreme cold will slow the chemical reactions batteries use to generate power, weakening their voltage.

Consider its location if your alarm is still beeping after replacing the battery. Attics, basements, and garages suffer the most when the weather gets cold. So try to keep them warm during the winter months to keep your alarm working normally.

The Battery Pull Tab Has Not Been Fully Removed

When you hear the battery pull tab, you might think of a strand of fabric in your device that you can pull to remove the batteries quickly.

However, the battery tab is actually a tiny piece placed somewhere in the battery terminal that needs to be removed before installing any batteries. It’s there to prevent a charge from completing in unusual circumstances before the alarm is fully installed.

If you fail to completely remove the battery pull tab, the detector may beep insistently until the tab is removed.

The Battery Drawer Was Left Open

The battery drawer is a small part of an alarm’s structure, but it’s also vital to its function. The drawer helps protect the batteries and hold them in place should the device suffer a sudden impact.

You can easily see when the drawer is left open after changing the batteries. However, it can be harder to see when it isn’t closed all the way or when something is hindering the mechanism.

The detector can sense when the door is open and will beep if it recognizes that a battery is in place, but the door isn’t closed.

The Detector Has Reached Its Full Lifespan

Though they’re powered by batteries (or sometimes, directly wired to a power source), smoke detectors have a limited shelf life and will eventually fail. Likewise, beeping can signal the end of the device’s life. Check with your owner’s manual if you’re unsure of a beeping pattern.

Usually (but not always), end-of-life patterns use longer, drawn-out beeps. They do not beep steadily but rather once every few minutes to better differentiate them from the standard alarm pattern.

As explained by Consumer Reports, most smoke detectors only last for about ten years. Some may have even shorter lifespans depending on features and previous use.

Read: How Long To Self-Clean Oven?

The Device Is Administering a CO2 Alert

Finally, if your alarm is consistently beeping and you’ve ruled out all other possibilities, it may be a CO2 alert. CO2 is especially dangerous because it has no odor or taste, so people have difficulty identifying when a leak is present.

The NHS describes how high levels of CO2 exposure can make you ill or even be fatal. If you believe a CO2 leak has triggered your alarm, leave your home immediately and dial emergency services.

The good news is that if carbon monoxide is determined to have triggered your alarm, it means your new battery is working perfectly.

Easy Fixes for a Smoke Detector Beeping With New Battery

Now that you have an idea of why your smoke detector is beeping, you can look into solving the problem. The following are some of the most common solutions to a smoke alarm that is beeping even after a recent battery replacement.

1. Perform a Hard Reset on the Device

To perform a hard reset on your smoke detector, follow these steps:

If this does not stop the beeping, read on for some further solutions.

Dust and corrosion are common problems that occur inside smoke detectors. These issues often go unnoticed without regular maintenance.

Removing Dust from Within the Smoke Detector

Dusty connections often go unnoticed when homeowners don’t perform routine smoke alarm maintenance. Instead, they wait until something has gone wrong before taking a look. Regularly scheduled cleaning will eliminate the threat of dust to your smoke detector.

To safely and thoroughly remove dust, remove the device and battery. Then, go over the accessible areas of the device with a vacuum on the lowest setting. Alternatively, you can use a can of compressed air (like what you would use to clean the inside of a computer) to blow everything out.

A quick vacuuming once a month will also remove bugs and waste from inside your alarm. Bugs are known to make their homes inside electronic devices because they are warm and dark, as described by Wired.

Keep in mind that moisture can damage a smoke detector’s components. Therefore, FirstAlert recommends against using any liquids or solvents to clean your alarm.

BobVilla.com explains that you can clean up corrosion with vinegar and a q-tip. It can, however, be dangerous, so you should wear protective rubber gloves during the process and safely dispose of corroded batteries following local laws.

Your goal should be to remove all corrosion from inside your device, paying particular attention to any metal contacts. The residue can severely block the electrical flow from new batteries. Once you’re sure you’ve removed it all, allow your alarm to dry before reinstalling the battery.

To avoid battery corrosion, be conscious of how you store batteries. For example, they need to be kept at or below room temperature, even when they are in use. You can also minimize corrosion if you don’t mix old and new batteries in the same device.

The beeping issue can also originate from the components of the battery compartment. Take the following steps to ensure that your battery components are working properly.

It’s hard to miss the battery pull tab, and you may even remember removing it during the installation process. They’re sometimes a bright color with brief instructional text. However, if the tab is ripped, part of it may still be there, potentially hindering energy flow from the battery.

Carefully remove your alarm and battery and look at where the tab was. If you can’t remember, consult your owner’s manual. If a small piece remains, you’ll need to remove and dislodge it carefully.

Make Sure the Battery Drawer Is Closed

It’s essential that the battery drawer is completely closed after you replace a detector’s battery. The key is to listen for a clicking sound when you shut the drawer. This indicates that everything is locked in place as it should be.

If you don’t hear the click, but the door feels secure, check the drawer for any small obstructions or damage. With most drawers, tabs will slide into grooves to keep things safe.

If one of the tabs is broken, even slightly, it can’t make contact, triggering the false alarm. If that’s the case, you can try to order a replacement part from the manufacturer. Otherwise, you may have to replace the entire unit.

Sadly, there isn’t much you can do once the device is at the end of its life except replace it. The sensors are what start to fail at the end of a smoke detector’s life, and you cannot readily replace those.

You can keep ahead of your device’s life expectancy by keeping a record of when you first installed it.

When your smoke alarm continues to chirp, don’t just assume that swapping in a new battery will silence it. Instead, those beeps could signify other issues that need your attention.

If you want to minimize the risk of false alarms in your smoke detectors, keep them clean, be conscious of environmental factors, and ensure your batteries haven’t expired. Like the steps outlined above, routine maintenance will go a long way towards keeping your device in working condition and reducing guesswork should something go wrong.