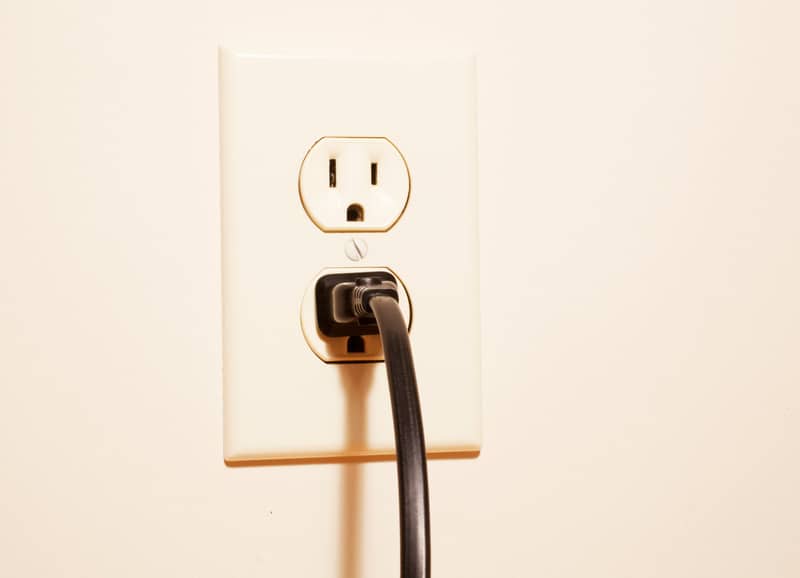 The electrical system inside a residential home can be one of the most frustrating parts of owning a home.

One of the most common problems is when an outlet stops working it can be a bit difficult to nail down the exact cause of the problem.

One of the biggest reasons is because of the outlets are typically daisy-chained in a room or even along a wall between two rooms.

As the circuits are hooked up each breaker is marked as to what areas inside the home the are associated with which breaker.

This way the homeowner or future electrician would be able to identify where the correct breaker is located.

As part of our research for this article, we came up with common causes for an electrical outlet that is not working, even if the breaker appears to be on.

Along with the common causes we came up with an easy fix that most homeowners should be able to take care of without having to call or pay an electrician.

Today’s residential homes all have the main power panel for the home located near where the electrical meter is connected to the house.

Inside the power panel is where you will find the circuit breakers for all of the electrical outlets in the house.

To make it easier to locate which breaker is associated with which electrical outlets the electrical contractor will label each of the circuit breakers inside the panel.

These breakers are designed to trip if an overcurrent condition happens.

This will cut off the current that flows to the outlets to prevent a possible fire due to an electrical short.

A tripped breaker is indicated when the breaker handle is sitting in middle between off and on.

However, there are times that the breaker is tripped but the handle does not move.

In this case, you will want to move the handle to the off position and then back to the on position.

Go back to the outlet and using a multimeter or a test light to see if there is power again.

The outlet is a GFCI and the breaker is tripped

According to current building codes all electrical outlets are located in an area of the house that represents an extreme danger of electrical shorts like near water.

However, since there is no specific code that covers how a house has to be wired, it is possible that the outlet you are dealing with might be daisy-chained with a GFCI equipped outlet and it was tripped.

A GFCI or Ground Fault Circuit Interruptor outlet is designed to break the connection of the power coming in and going out of the outlet.

If this is the case, you will need to check all of the outlets in the room to see if that happens to be the case.

It is really easy to identify this GFCI type of outlet because it will have a test button and a reset button.

The best way to check to see if it is tripped, just push the resent button.

Then you can go back to the original outlet and see if it is working again.

Using a multimeter or test light you can check to see if there is power there.

Loose connections on the outlet

As a homeowner, if you have an electrical outlet that is not working there are several possible causes other than the circuit breaker is off or tripped.

If you have eliminated the power is off as the problem, the next possible thing is that there might be a loose connection of the wires leading to the outlet.

This will prevent the outlet from receiving the necessary power to work properly.

To check to see if there is a loose or disconnected wire you want to first locate the correct breaker inside your home’s main power panel and turn the breaker off.

Using a screwdriver to remove the screw that his holding the outlet cover on.

Then you will need to remove the two screws that are holding the outlet in place.

Today’s outlets have push-in holes located at the bottom of the outlet on both sides.

There is also a screw that corresponds with the hole nearest it.

If none of the wires are hanging out, you should go ahead and tighten all of the screws to ensure that none of them are loose.

After tightening all the screws to be sure everything is tight, push the outlet back into the wall and tighten the two screws.

Then put the cover back on and turn on the breaker and test the outlet.

The electrical outlet is damaged

If you have an outlet that is not working in your home and you already checked to see if the breaker inside the main power panel for your home and it was not off or tripped.

It is very possible that there can be damage to the outlet that you cannot see from the outside.

There are a couple of ways that an electrical outlet can be damaged that are not visible.

But the damage will likely prevent the outlet from working properly.

The only real way to determine if there is damage to the outlet is to open it up and investigate further.

In order to do this, you need to first turn off the breaker in the main power panel that feeds the outlets that you are looking it.

Once you turn the power off remove the screw that is holding the cover in place with a screwdriver.

Then you need to re remove the two screws holding the outlet in place.

Carefully pull out the outlet and inspect it for any signs of burning, arcing or any other type of damage.

If you suspect damage, it is safer to just replace the outlet with a similar outlet.

Once it is replaced, using a screwdriver to put the two screws that are used to hold it in place.

Put the cover back and turn the breaker back on and test it.

Hi there, I'm Eugene
This website was created with a purpose to help our visitors to find proper information about appliance and home repairs. Feel free to ask any questions about repairs.
Scroll back to top