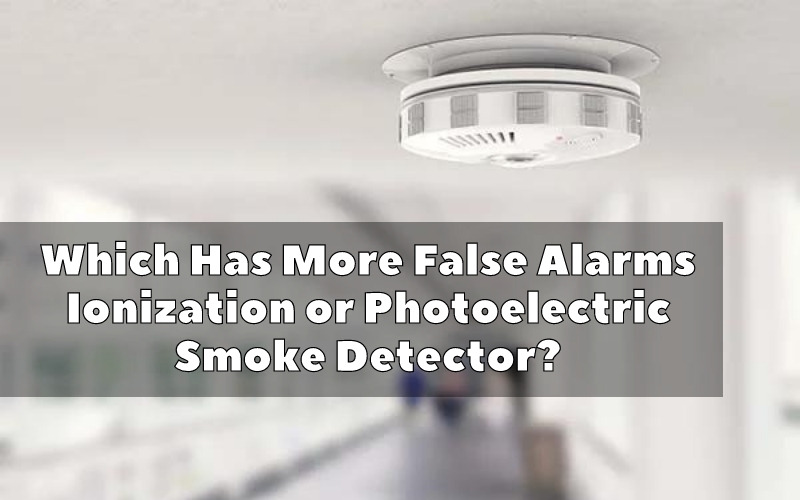 Whether your smoke detector is the photoelectric or ionization type, it’s undoubtedly essential to the safety of your home. However, these smoke detectors can also give out false alarms, which can be a nuisance — not to mention a safety hazard because you’ll end up disabling them and then not having them work when you need them.

In this article, I’ll help you determine which type of smoke detector is in your home and understand the differences between the two types. I’ll also talk about other types of smoke detectors you can use at home. Read on to learn more!

Why Are False Alarms a Problem in Smoke Detectors?

False alarms are a problem in smoke detectors mainly because they are a nuisance. Too many false alarms are dangerous because people will then ignore the alarm during a real emergency. Every alarm should be taken seriously, and nuisance alarms prevent people from doing this.

Both ionization and photoelectric smoke detectors are readily available. If you check the labels around your smoke detector, it should be easy to check which type you have.

Here are the common features of ionization smoke detectors:

In contrast, a photoelectric smoke detector will likely have “P” in its model number and won’t have the materials mentioned above.

When there is a flame near an ionization smoke detector, the gasses released from the flames enter the smoke detector and change the levels of ionized particles. At a specific threshold, the alarm rings.

While this is an excellent way to detect flames, it does nothing to detect smoke. Also, a small flame near the smoke detector can set it off even if there is no emergency, leading to false alarms.

Read: Why Is Garbage Disposal Smoking?

In one type of photoelectric alarm, the light sensor measures the way light is obstructed from the light source that shines directly on the sensor.

The second type has the light shining away from the sensor. When smoke enters the smoke detector, the smoke particles deflect light into the sensor, which will trigger an alarm at a certain threshold.

Both types of photoelectric smoke detectors are equally effective at smoke detection and give fewer false alarms.

Which Is Better: Ionization or Photoelectric Smoke Detectors?

Photoelectric smoke detectors are far superior to ionization alarms because they give better results and fewer false alarms. Although they are slower in some situations, a good quality photoelectric alarm is still a better choice.

Studies have shown that photoelectric smoke detectors are more effective at detecting smoke than fire. I should note that smoke inhalation is the leading cause of death in house fires, and is often considered more dangerous than the fire itself.

If you’re now convinced of the benefits of photoelectric smoke detectors over ionization ones, let me give you a few recommendations (courtesy of Amazon.com):

Read: How Long To Self-Clean Oven?

If you can’t decide between an ionization or photoelectric smoke detector, you’d probably be happy to know that some companies have gone the extra mile and designed combination alarms. As their name implies, these are smoke detectors with both ionization and photoelectric technology. The idea is that combination alarms are supposedly more efficient and will give better results.

When installing any type of smoke detector, it’s best to double-check the building codes in your area for the specifics. You may also consult a professional for advice.

That said, here are general tips on installing smoke detectors in your home:

Many new smoke detectors can detect carbon monoxide as well as smoke. Carbon monoxide (CO) is a by-product of incomplete combustion, and carbon monoxide poisoning can be serious and potentially fatal. CO poisoning is associated with fires, especially when a fire is burning indoors with little to no ventilation.

CO is a “silent killer” because the gas is tasteless and odorless, and symptoms aren’t immediately noticeable until the victim experiences seizures (or worse, death).

Since I touched on a couple of types of house fires earlier, it’s also worth noting that house fires are typically categorized according to their source, as follows:

The reason you should know the sources of house fires is so you can better deal with them. For example, pouring water on electrical fires is a bad idea because water conducts electricity, and you risk electrocution. Instead, put out the fire with a fire extinguisher.

Regardless of the type of smoke alarm you want to install at home, never disable, disconnect, or ignore it. Photoelectric smoke detectors are less likely to sound false alarms and are considered superior ionization alarms. Proper placement of smoke detectors is important and often spells the difference between nuisance alarms and alarms that are actually useful.