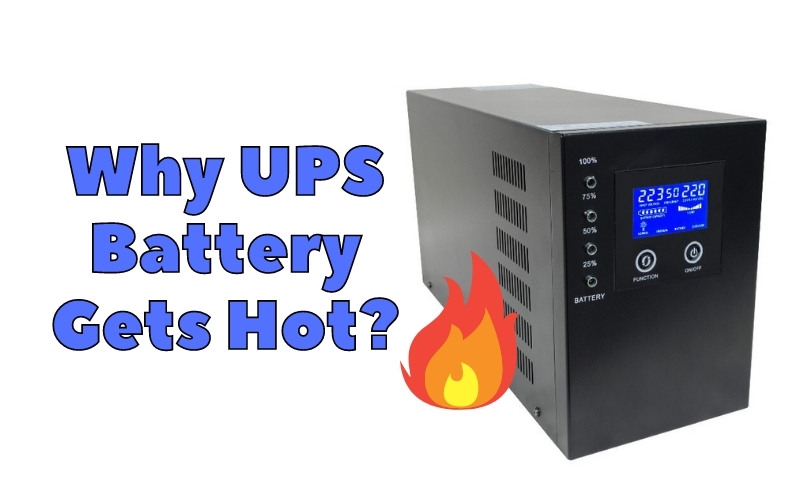 UPS batteries are known to run a little warm, and that’s normal. However, those batteries can sometimes run a little hot if they’re not kept in an ideal temperature range. But why exactly does a UPS battery get hot?

A UPS battery will become hot for several external and internal reasons. Externally, a lack of ventilation, dirt buildup, fan failure, and clutter around the unit can lead to higher temperatures. Internally, however, overloading, overcharging, and aging batteries can also produce excessive heat.

A warm UPS battery is typical, but a hot one can be dangerous. This guide will help you understand why those batteries generate too much heat and what you can do to prevent that from happening.

Is It Normal For A UPS To Be Warm?

Yes, it is normal for a UPS battery to be somewhat warm during its regular operation. All types of batteries become slightly warm when you use them, even those that aren’t a part of a UPS.

As a result, some of the energy will dissipate in the form of heat. Sometimes, you can feel that warmth through the UPS unit’s casing.

However, it’s crucial to understand that too much heat is a sign of a problem. In other words, while a warm UPS battery is normal, it should never be too hot to the touch.

If you touch your UPS unit and it feels too hot, that means the battery or the UPS unit as a whole is experiencing a problem that you must resolve immediately.

Read: How To Reset Dyson Vacuum?

Why Is My UPS Battery Getting Hot?

Here are a few likely reasons why your UPS battery is starting to get a little too hot:

One of the most common reasons that a UPS battery gets too hot is that the unit lacks enough ventilation. More specifically, there isn’t enough space around the UPS unit for air to flow freely.

Sure, UPS units tend to come with one or more ventilation fans built into them. These fans run continuously to draw hot air away from the battery inside and force it out into the surrounding environment.

However, the UPS unit can’t remove the hot air fast enough if that environment is too cluttered. As a result, the hot air builds up inside the UPS, causing the battery to become hotter than it should be.

Another common reason a UPS battery gets hot is a buildup of dirt. That’s especially true if the UPS has been left in the same spot for an extended period without periodic cleaning.

In particular, the dust buildup happens around the vents on the UPS battery’s casing. But, of course, that includes the areas in and around any built-in ventilation fans.

When dust blocks the UPS vents, outgoing airflow is restricted. That will prevent the unit from forcing hot air out, which prevents the battery from cooling down sufficiently.

Unfortunately, the built-in ventilation fans on a UPS unit can also fail after some time. The odds of that happening will continue to rise the longer you’ve been using the unit.

When those ventilation fans stop turning, it becomes incredibly challenging for hot air to flow away from the batteries inside. Sooner or later, the accumulation of hot air will cause the UPS battery to become very hot.

You can check for a failed fan pretty quickly. For example, try shining a flashlight at the ventilation fan to see if it’s still turning. A fan that doesn’t turn or only turns intermittently is likely why the UPS battery is becoming too hot.

#4 Items On Or Around UPS

This reason is somewhat related to what you saw earlier in #1. Sometimes, a UPS battery will become too hot if the unit is crowded with other objects on or around it.

For example, some people might put the UPS on a shelf next to many other objects. Worse yet, some might even place those objects directly on top of the UPS unit.

Those objects will stop the UPS battery from naturally dissipating heat into the surrounding environment. In more severe cases, some things might block the vents or exhaust fans on the UPS’ casing.

The end result is the same: hot air cannot escape the UPS, causing the battery to overheat after a while.

Read: Do Roomba Batteries Need To Be Replaced?

So far, in reasons #1 to #4, we’ve seen that a UPS battery becomes hot because it fails to cool down continuously. However, several electrical reasons can cause the same problem.

The first electrical problem is ‘overloading’. When it comes to UPS batteries, ‘overloading’ means that too much of its power is being consumed at one time.

This problem typically happens when too many devices are connected to the UPS or if there is a voltage mismatch between the UPS and those devices.

All UPS batteries have limited useful lifespans. However, they don’t immediately stop working when those batteries get old. Instead, the battery’s internal components slowly degrade over time.

So, while the battery continues to work, it will also experience problems and a drop in quality.

For example, a battery’s chemical composition will start to change, causing an increase in electrical resistance. That unusually high resistance causes more electrical current to convert into heat.

In other words, charging or discharging an old UPS battery will cause it to generate heat.

These days, UPS batteries have built-in protection to ensure they don’t overcharge. Still, a faulty unit could continue to supply electricity into the battery despite already charging to its fullest capacity.

In a situation like that, the excessive charge will affect the battery’s chemistry so that it’ll continue to generate excessive amounts of heat.

Proper ventilation and functioning fans will control that heat, but only up to a certain point. Beyond that, the UPS battery’s temperature will continue to rise until it causes a catastrophic failure.

Here are a few more questions and answers to help you understand your UPS battery and why it becomes hot:

How Can I Keep My UPS Cool?

The best way to keep your UPS cool is to place it in a well-ventilated area. That way, air can flow in and around the unit, allowing its heat to dissipate naturally. Besides that, some UPS units also have room temperature requirements. For example, industrial-size UPS units must be placed in air-conditioned rooms to optimize their temperatures.

What Happens If A UPS Overheats?

An overheating UPS will continue to function, but only to a point. After that, overheated UPS batteries will not be able to charge and discharge efficiently, causing much of their energy to waste. Besides that, excessive overheating will turn the UPS into a fire risk, potentially destroying itself and everything around it.

What Causes A UPS To Overheat?

A UPS will overheat if its ventilation is not maximized. For example, blocked vents and ventilation fans that do not work will cause temperatures to rise too much. Besides that, overcharging and a worn-out battery will also cause the same outcome.

How Hot Is Too Hot For A UPS?

Each UPS has a temperature rating that you must maintain to keep the unit operating safely and efficiently. For example, many entry-level UPS units are rated for a maximum temperature of 104 °F.

Are Batteries Affected By Temperature?