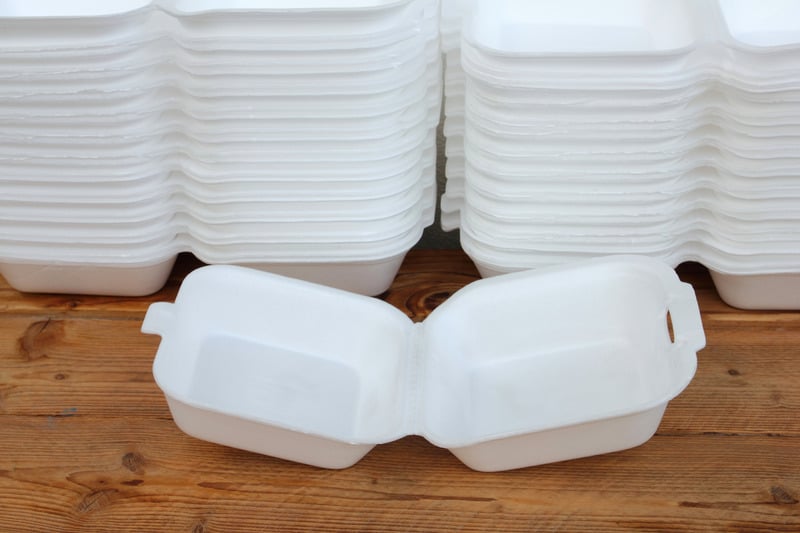 Let’s Start with “What is Styrofoam?”

Styrofoam is a term used to describe a building material developed by Dow Chemical. It is made from a compound called polystyrene.

It has many different uses in construction due to its insulating properties.

Along with its insulating characteristics it also lends its rigidity in the construction industry.

However, there is a common misconception about Styrofoam that has lead to widespread confusion in several countries including the United States and Canada.

The confusion involves a very common product used extensively in the foodservice industry.

The product used for drink containers, food serving and storage containers that are made from expanded polystyrene foam.

These types of containers are actually mislabeled as being Styrofoam, when in fact they are not actually Styrofoam.

As stated previously, Styrofoam is an actual registered name of a foam product made by Dow Chemical.

What are the dangers of heating food in Styrofoam containers in the microwave?

It has long been believed that dangerous chemical residues can be released or leached from the inside surfaces of certain polystyrene and plastic containers when exposed to high heat levels.

According to the FDA, the polystyrene compound found in the Styrofoam when exposed to excessive heat will give off toxins into the food that it is holding.

This makes it a possible health hazard to heat any type of food in a microwave inside a container made from Styrofoam.

According to several human and animal studies, the polystyrene compound found in Styrofoam has been linked to cancer in both humans and animals.

However, the products made using the expanded polystyrene foam that is popular in the foodservice and restaurant industries do not appear to have the same type of issue.

Two common chemical ingredients that are used in the production of expanded polystyrene have been identified.

These two chemicals, bisphenol-A (BPA) and phthalates are referred to as plasticizers and are used to stabilize the plastic used in making the foam containers.

Unfortunately, these two chemicals are known to be endocrine disruptors in the human body.

This means that they can have a negative effect on the hormones in the body which can be extremely dangerous if they were to accidentally leach into your food from the foam container.

Some states have banned imposed bans on foam container

While these foam containers may not pose the exact same toxic leaching danger that Styrofoam does, there are several cities that have moved forward with bans on the use of these types of products.

They have determined that the fact that they pose an environmental hazard since they frequently are tossed out of car windows and also end up in the city landfills all across the country.

Cities like San Fransisco, Ca and Seattle, Washington have determined that since the foam containers don’t break down readily and they are also difficult to recycle this poses a real danger to wildlife who often mistake them for food.

Are there microwave-safe Styrofoam containers?

Expanded polystyrene is currently used in a number of containers used by the foodservice industry including fast food drinking cups and certain types of prepared food containers in fast food restaurants.

It is preferred mainly due to its high insulation properties that keep things hot or cold.

The concern arises when you go to use a microwave to warm up your leftovers.

The thought is that the microwave could expose the polystyrene in the food containers to high enough temperatures that could lead to the leaking or leaching of the dangerous compound called styrene.

The simple solution would be to transfer the food to a microwave-safe dish and then heat up your food.

The US Food and Drug Administration or FDA is the governmental agency that is responsible for food safety in the US.

Since these foam products are used in conjunction with food the FDA took the unusual step of doing extensive testing on these expanded polystyrenes to determine if there are any that can safely be used in microwaves to warm up food or drinks.

Through the use of an extensive test process, they are able to determine what kinds of these foam containers that do not pose a danger to humans when used inside of a microwave for warming up the contents.

How to determine if a foam container is microwave safe?

As part of the FDA’s approval process was to develop a way for consumers to be able to quickly and easily determine if the foam containing that their food came in is microwavable or not.

What the Food and Drug Administration came up with is a special symbol that must be stamped into the outside of the container, normally on the bottom.

The FDA came up with the requirements that manufacturers must meet in order to be able to mark their product safe for use in a microwave.

All manufacturers of these types of foam containers must stamp each and every container with this special symbol.

The danger of leaching of toxic substances like styrene which is found in the expanded polystyrene foam food and drink containers is caused by the excessive heating of the inside surfaces to temperatures at or above 200-degrees Celcius.

While most microwaves will not reach anywhere near the high, water does begin to boil at 100-degrees Celcius.

It is wise to stick to the cooking directions on the packaging which should help to ensure that the food that you are heating up in the microwave does not get too hot.

This is especially true if the food you are trying to heat up comes in a polystyrene container.