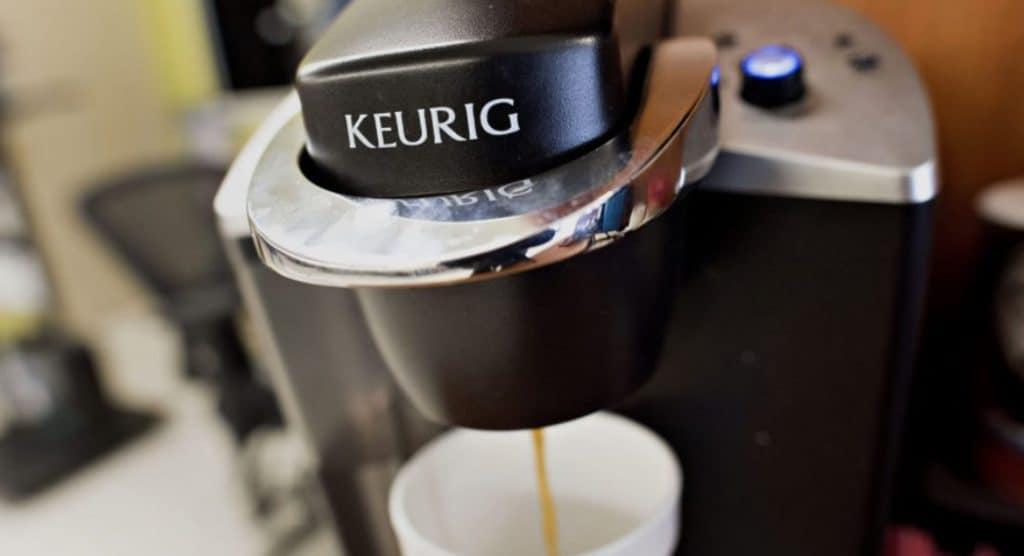 What brand name comes to mind when you hear the word ‘coffee’ and ‘convenience’? If you’re like most people, the first thing to cross your mind is the brand name ‘Keurig’.

That’s probably one of the most popular brewing systems the world over, especially when it comes to single-serving coffee pods.

With just a single pod put into a Keurig machine, you can have a hot (or cold) cup of your favorite beverage within seconds.

While these machines do a fantastic job of simplifying the coffee-making process, they do run into a few common issues from time to time.

The most common issues with Keurig Coffee Makers are:

Not to worry, though. In this article, we’re going to help you do some Keurig coffee maker troubleshooting to identify and solve common problems with these machines.

The Display Isn’t Working or Not Responding

These days, Keurig coffee makers come with fancy touch screens that are meant to simplify the process of using them. While this shouldn’t happen at all, there is a possibility that you may find that display not working at all.

Before you call for help, there are a few steps that you can take to troubleshoot the problem a little further.

First steps: First, shut off the Keurig coffee maker at the power source and unplug it for about a minute.

If you’d like to be thorough, take that machine and plug it into a different wall socket. That way, you can rule out that there’s a problem with the power source.

Once you’ve reconnected the machine, the image of a power button should appear on the screen.

Suppose that happens, then all you’d need to do is set the clock and preferences again and continue making your cup of coffee. Perhaps the display just needed a reset.

However, if the display still doesn’t work, then you may have a real problem on your hands.

Why this happens: Whenever the touchscreen fails to work, there are generally two possibilities.

It could be that the connectors (i.e. the wiring to the touchscreen inside the machine) is faulty or has come undone. Or, moisture and/or heat could have found its way into where the touchscreen is located.

If that’s the case, then the affected parts may need to be replaced.

What you can do: If your Keurig machine is still under warranty, you should bring it to them so they can restore the machine or get you a replacement. It’s always best to get a professional to look at it for you.

However, if you’re the DIY type, you could buy the replacement parts online and fix it yourself with a spudger and a screwdriver.

Assuming you’re familiar with appliance repair, the process may take anywhere from 15-20 minutes.

Remember: always disconnect the power supply before opening any parts of the machin.

There’s only one thing that you’d expect from a Keurig coffee maker, and that is for it to make you coffee.

But what happens when the machine won’t heat any of the water or brew your coffee?

That seems to be a common problem with some Keurig models. Thankfully, the solutions are just as easy to use.

First steps: Firstly, you’ll want to make sure that you’re giving your Keurig coffee maker enough time to heat up in the first place.

Let’s be honest. Sometimes, we get a little impatient for our coffee first thing in the morning, especially if we’re running late for work.

Once you’ve done that and the machin still won’t make your coffee, then it’s time to consider that you may have some kind of a clog or blockage in the machine, and water just can’t flow to where it needs to be.

Why this happens: Clogs in your Keurig coffee maker are typically caused by one of two things: a buildup of either debris or calcium.

If your machine is still new, then the higher likelihood is that you’ve got some dirt or coffee grounds clogging up the machine.

However, machines that have seen a lot of use will usually suffer from a calcium buildup.

Not to worry! Both of these buildups are somewhat straightforward to clear.

What you can do: To give your Keurig coffee maker a good flush, fill up the water reservoir and let the machine run a few coffee-making cycles (without giving it any actual coffee to brew!).

You’ll want to do this so that the machine will heat up the water, flush it through the entire system, and hopefully push the clog through with it.

Now, if calcium deposits are your problem, you’ll need to do what’s called ‘descaling’. You can do this the home-made way using water and vinegar to dilute any buildups.

Or, you can purchase a descaling solution specially tailored to coffee makers like yours. Keurig makes their own brewer cleaner, though you can also go for products from other manufacturers.

These products will help you flush your entire machine through and through, making it like it’s brand new!

Shuts Off On Its Own (When Idle or Mid-Brew)

Some Keurig coffee makers can make you think that they have a mind of their own, especially if they shut off by themselves.

It’s one thing if the machine shuts off when you leave it alone. Still, it can be incredibly frustrating if it shuts off halfway through brewing your cup of coffee.

As mysterious as this problem may seem at first, let’s explore what you can do about it.

First steps: To troubleshoot this problem, it’s essential to be clear about when the machine shuts itself off.

Suppose you’ve left the machine on and it shuts off after a few minutes. If that’s the case, then it could just be the machine’s auto-off function. The machine shuts itself off automatically as a way to conserve energy.

However, if the machine shuts off mid-brew and shows you the ‘Brew Interrupted’ message, then that’s a different story.

Why this happens: Why does the ‘Brew Interrupted’ message suddenly appear on the display while the machine stops making coffee?

Well, it’s usually because there’s a blockage at the point where the coffee leaves the machine. That part is known as the ‘needle’.

When that point is clogged, and coffee can’t come out, the machine senses that there’s too much pressure and stops working immediately.

Solving this issue is pretty straightforward, as it requires you to clean that clogged needle.

What you can do: Keurig machines usually come with the Keurig Brewer Maintenance Accessory.

If not, you could get your hands on one to keep your machine in good working order.

That accessory will help you to flush out any clogs in the needle and get things running smoothly again.

Besides that, you can and should also flush out the entire system by running a few cycles without using any pods.

That will allow the machine to heat up water and push it through the whole system, diluting and removing anything debris or coffee along the way.

The Machine Isn’t Brewing The Correct Amount Of Coffee

One of the benefits of a Keurig coffee maker is that it allows you to set how much coffee you’d like to make.

But what happens when it gives you less than what you asked for? Well, that’s a symptom that the machine isn’t getting enough water for the brew, possibly due to a blockage somewhere.

First steps: First things first, you may want to give the Keurig coffee maker a simple reset.

Shut off the power supply and wait for about a minute before turning it back on. You may need to reset the clock and any other machine preferences you may have had before.

Check that the reservoir is full so that you can rule out a shortage of water causing the problem.

You can then try to run a brewing cycle either with or without coffee to see if the machine dispenses the correct amount of water.

Why this happens: Suppose your coffee maker doesn’t dispense the correct amount of hot water, resulting in a coffee serving smaller than what you wanted.

Generally speaking, this is caused by a blockage somewhere along the way inside the machine.

When the water or coffee can’t flow freely, the machine may sense that there’s too much pressure building up and cut the brewing process sooner than it should.

As you’ve seen with previous issues on this list, blockages are caused by buildups of calcium or scale, debris, or coffee.

This problem can be quite tricky, as it would be hard to pinpoint the clog’s precise location. That blockage could be anywhere along the line between the reservoir and the needle where the coffee comes out.

What you can do: Just like any other kind of blockage, you’ll need to flush out the entire system.

If you can’t figure out the clog’s cause, you may want to start by descaling the machine using the Keurig Brewer Cleaner (or something similar).

You can then run a few cycles (without coffee in the machine) to make sure that water can flow from the reservoir through the tubes and out the needle without any restrictions.