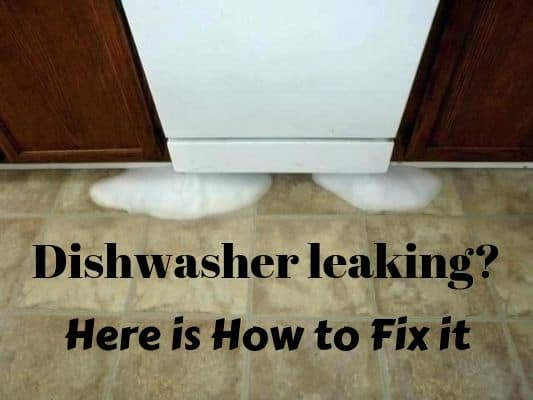 As a dishwasher owner, you may have to deal with your dishwasher leaking.

There are various causes of dishwasher leaking, which is why it is advisable that the first action you take is making a proper diagnosis then proceed to take appropriate action.

Dishwasher leakages can be attributed to various factors including faulty sections within the dishwasher such as; water valve inlet, the drain pump or a damaged door seal.

Each of these issues requires unique solutions based on their nature, and so understanding where the problem lies in the first of several necessary steps to resolve this issue.

If Bosch dishwasher leaking even when Its not running

A hard yet common problem is a dishwasher leaking when not running; something that can be quite challenging to diagnose.

There may be issues with the water inlet valve or “water backflow”.

The dishwasher leakage may be caused by a faulty water inlet valve which may be stuck open, due to calcium builds-ups.

How does this cause a leak? If the inlet valve is stuck open, the water that is supposed to flow into your dishwasher from the water line, will not be controlled and this will cause the water to overflow.

This is a common issue with Bosch Dishwasher leaking.

Another issue could be when the dirty water coming into the dishwasher from the sink drainage line through the drain hose. Due to backflow and faulty check valve.

if clean water coming into your dishwasher when not running, that’s most likely an issue with a water inlet valve.

if dirty water coming into the dishwasher, thats possibly an issue with faulty check valve on the drain hose. Which is not keep backflow from the sink.

So, if you notice your dishwasher leaking when not running, you can solve this issue by changing the water inlet valve.

And the same thing with the check valve on the drain hose. If it’s damaged, you can’t fix it. Just replace it with a new drain hose. You can get it here.

If you notice your dishwasher leaking when not running the problem may be also a drain hose.

The drain hose would be most likely be laying flat beneath the sink which resultantly lets water back into the dishwasher, retaining it until it is in excess and begins to leak.

You just need to put drain hose above the drain line. Just like shown on the picture below.

A Kitchenaid dishwasher leaking is something no one fancies. Some of the leaks are caused by a broken down circulating motor with the most affected parts including; the shaft seal, the impeller seal kit or the seal kit.

You can try to replace the whole pump and motor assembly once you experience your Kitchenaid dishwasher leaking.

However, with the expenses considered you may want to make a proper diagnosis first then have the main cause within the dishwasher’s motor dealt with.

You can check this link also if you experiencing similar issues.

A  Maytag dishwasher leaking from the bottom of the door is a common malfunction frowned upon by the users of this particular brand. The fault, in most cases, is a result of a damaged door seal.

The water leaking at the bottom of the dishwasher is a common indication of a leak under the tub.

The parts of the dishwasher under the tub that may be affected, resulting in the leakage are; the water drain pump or the water inlet valve.

Also, for Maytag dishwashers, another cause of a leak through the door seal is a worn out gasket on the latch that seals the soap dispenser.

The worn out gasket leaves a small space underneath the latch for water to leak out of your dishwasher while the dishwasher is running.

To deal with a Maytag dishwasher leaking from the bottom of its door start by checking for tears, gaps or cuts on the door seal and conduct a simple test like closing the door on a dollar bill to confirm if the door makes good contact.

Once the door is repaired, you can then conduct the same simple experiment using the dollar bill, and if the door makes good contact, then you’re good to go.

Is your Whirlpool dishwasher leaking underneath? The issue is most likely from the motor area.

However, for a Whirlpool dishwasher, you might want to check the diverter seal.

The diverter seals for Whirlpool dishwashers tend to wear out which causes leaks from underneath the dishwasher throughout the motor area.

An expert will advise you that you have to first determine the initial cause of the fault that caused the leak.

This goes a long way in ensuring that the issue that played a part in damaging your dishwasher’s motor is dealt with to avoid future problems.

A Ge dishwasher leaking underneath is another fairly experienced glitch.

Just like the Whirlpool dishwasher, a leakage from underneath the Ge dishwasher in most cases is attributed to damage in the motor area.

To deal with Ge dishwasher breakdown and get your dishwasher to run efficiently and conveniently by eliminating the dishwasher leaking issues there are various approaches that you can apply.

The ordinary and most efficient way is replacing the entire pump and motor assembly.

However, given the expenses, you might consider other approaches based on the cause of the leak in this area.

For a Ge dishwasher leaking underneath you should first check for leakages in the drain shaft seal.

This would indicate that the cause of the leakage is from the dishwasher’s impeller and seal. In this case, you can save on the cost by replacing the impeller and the seal kit independent of the drain pump.

The Most Common Causes Of Dishwasher Leaking

Well, top of the list is a leaky dishwasher door followed by loose or marred valves and damaged door seal.

A leaky dishwasher door can be attributed to a loose or broken latch or a worn out gasket, both of which can be easily replaced.

A significant amount of dishwasher owners, especially new owners, tend to wonder, can overloading a dishwasher cause it to leak? The answer is yes.

It is important in this case to understand the difference between an overloaded and a full dishwasher.

Overloading your dishwasher blocks the spray of water which diverts the water inside the dishwasher from the bottom of the tank causing it to splash out under the door.

This dishwasher leak can be solved by lessening the load before you set it to cleaning.

Failure to regard the maximum limit of your dishwasher will, however, result in the deterioration of the dishwasher’s performance since you may have to rinse the same dishes more than once.

Another common question is, will a dishwasher leak if it is not level?”. The answer is yes because the level affects the water in the tray which in turn determines the possibility of your dishwasher leaking.

An unlevel dishwasher creates instability which in turn will raise the water level in the tray. The raised water level on the tray, as a result, will accumulate within your dishwasher.

The accumulation of water in the dishwasher, therefore, creates a pool that will later leak, in most cases, when you open the door.

Luckily, you can avoid this by simply rocking the dishwasher back and forth during installation.

If it rocks, then it is not level, which means that you should make the relevant adjustments. Most dishwashers have adjustable feet which you can shorten or lengthen to make your dishwasher level.

Now that you have an idea of the issue causing the leak, the next question will be “how much does it cost to fix a leaking dishwasher?”

Well, the cost of repairing a leaking dishwasher varies due to various factors, including the cause of the leakage to the brand of the dishwasher appliance in question, among other things.

There is a vast difference in pricing, especially in the replacement of parts which can range from as low as $10 on parts such as a worn-out gasket to $600 for motors and pumps.

Of course, the brand of the dishwasher is a factor in the pricing of these parts as well.

Acquiring the part for replacement is one thing, and having it installed to restore your dishwasher is another thing altogether.

As much as some of these repairs can be done from home with the right tools, some would require a professional’s touch.

Another common concern is, how much does it cost to replace a drain pump in a dishwasher? In this case, it varies majorly based on the mode of repair that you opt for.

To buy a drain pump would cost you approximately $35 to $85 from the appliance store.

For replacement options, on the other hand, you can either do it yourself and save money or seek an expert’s assistance at an approximate cost of $150 to $350 depending on the make and model of your dishwasher.

It would be wise to hire a technician if you can afford it since you might misdiagnose the cause of the dishwasher leaking and cause more problems.

And more problems for the dishwasher means more money used for repairs.

And there you have it, everything you need to know on dishwasher leaking that you can apply to restore your dishwasher back to an efficient and convenient machine.

On a light note, make sure you check your dishwasher when you notice a problem rather than waiting for them to escalate and you may end up saving yourself a lot of money