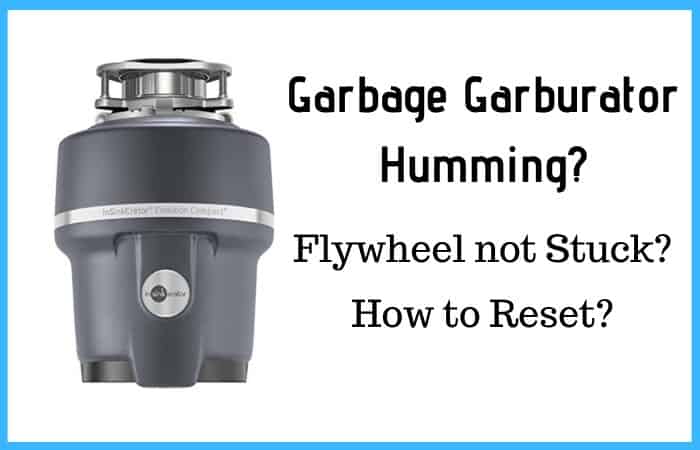 A garbage disposal humming sound doesn’t automatically mean it’s time to trash the old and replace it with a new one.

Nor does it mean you need to call a repair tech and pay them $250, for them to flip a switch.

Take a step back. There are a number of reasons your garbage disposal humming might not be as drastic as you think, and might be a simple fix in some cases.

We’ll highlight some of the primary issues that might be causing the disposal to hum, what you should do if it’s humming, and when it’s time to call a repair tech, if the garbage disposal humming doesn’t cease.

To begin with, there are two primary causes for your garbage disposal humming sound

Sometimes, the garbage disposal isn’t operating and starts to hum; in some cases, it might operate normally, but still hums. Neither of these is a good thing, but there are some solutions to consider.

What if the Garbage Disposal Humming but the Flywheel isn’t Stuck?

If the garbage disposal humming sound is persistent when you turn it on, but the flywheel isn’t stuck, the likely reason for this is that the motor bearing has ceased.

The simple fact that your garbage disposal is humming, means it’s still getting power, which is a good thing.

One of the primary reasons this might be happening is the GFI (Ground fault circuit) is tripped up, and is causing a lack of power (currents) to get to the disposal.

If there’s a lack of current, this can result in a humming sound.

If this is the cause, the solution would be to try resetting your unit.

There’s a red reset button at the base of garbage disposals.

Simply press or hold down the button (each disposal has different reset requirements) to see if that does the trick.

You might want to give it a few minutes to cool down, especially if you’ve been trying to get it to stop humming for some time. In most cases, that will resolve the issue.

It basically resets the current switch, ensuring that your garbage disposal is getting sufficient power from the GFI, and should self-resolve.

If your disposal is smoking, this is typically caused by a burnt motor or motor capacitor.

In some cases, it’s caused by a food jam or clog, hence, the humming sound you’re also hearing.

If there’s something stuck in the grinding chamber, it’ll cause the motor to work harder than it has to (faster), causing internal heat, and the smoke/smoke smell.

In order to repair this, there are a few simple steps you can take

Allow it to flush itself out for several minutes. You can do this by running water down the sink to help cool down the motor.

If that doesn’t resolve the issue, or there was nothing clogged in the sink, it’s more likely than not your motor capacitor is burnt out.

In these cases, you’ll have to replace the garbage disposal.

our garbage disposal can leak at a few different places.

To find out where the leak’s coming from, you’ll need to shut off the disposal. Find the disposal mount, remove it, and check the bolts below it.

In most cases, if this is where the leaking’s coming from, you’ll see water dropping.

Simply tighten the bolts if they’re loose and replace the disposal mount.

If there’s still a leak when you turn the disposal back on, this might be because the sink flange is too low.

Remove the bolts, lift the sink flange, and place plumber’s putty around it to hold it in place.

You’ll tighten the flange, remove the excess putty, and place the disposal bolts to affix the unit in place.

If there was a gap between the flange and disposal, this might have been causing the leaks.

The plumber’s putty should serve as a barrier to preventing water from seeping through.

With most leaks, this will resolve the problem.

If this is the case, you might want to consider calling a specialized repair tech that works with Badger systems.

They’ll know how to troubleshoot and know what to look for, if the cause of the leak isn’t a common one.

Grease, sediment, or even hair buildup, can cause backups in the plumbing of your kitchen sink.

This is an issue with the pipework, not with your garbage disposal.

However, the blockage, which isn’t allowing the water to flow through, is going to cause your garbage disposal to cease as well.

At this point, you’ll likely see the sink begin to drain. Some clogs are caused by thicker, larger items, or extremely greasy foods and debris.

If this builds up over time, it may require the use of a snake to remove it.

Once the water is freely flowing and draining, you can turn your garbage disposal back on.

Again, if neither of these resolves the issue, you might choose to contact a repair technician to see what the underlying reason is for the clogging and humming.

Since most clogs are a result of plumbing, if you’ve ruled that out, you might choose to let a professional deal with what’s causing plumbing internally with your garbage disposal.

If the garbage disposal humming persists but the blades are spinning normally, what’s the solution?

First, you’ll have to determine what’s causing the humming.

If it’s not food or something jamming the blades, it might be a foreign object.

If you have kids in the home, they might’ve thrown something down the garbage disposal they shouldn’t have.

If the propellers are spinning normally, start by cutting off the power.

You’ll have to get below the sink, using the hex (Allen) wrench to open up the disposal from the base.

If it is a foreign object, you’ll probably find it easily. Simple remove this, replace the base of the disposal, and turn the power back on.

If this resolves the issue, and there’s no more humming, you know that’s the solution.

If this doesn’t resolve the problem, the second issue might be that GFI isn’t producing enough power to the disposal.

A tripped GFI will result in lack of power or insufficient power to your garbage disposal.

This can cause it to hum.

If this is the problem, the reset button is your best ally. Reset the disposal unit, and let it sit for several minutes before retrying to start it.

Once you do, if the humming has stopped, you’ll know it was a lack of power.

If not, it may be time to call your favorite local repair tech to check out the garbage disposal.

How to Reset Garbage Disposal Humming in Your Disposal

Every garbage disposal has a reset button at the base.

If your garbage disposal humming is not caused by any of the above issues, you might try this last option to reset it. To do so

Doing this will reset your garbage disposal. As with previous repair solutions, you might want to let the garbage disposal rest for a few minutes before turning the power back on and trying it.

In most cases, resetting it will resolve the garbage disposal humming sound.

If all else fails, call your repair technician.

Sometimes, it really is time to replace your 20-year old garbage disposal.

In some cases, it’s a plumbing issue which requires the assistance of a plumber.

Regardless, try out some of these fixes first, before overspending on unnecessary repairs if you don’t have to when your garbage disposal humming won’t stop.