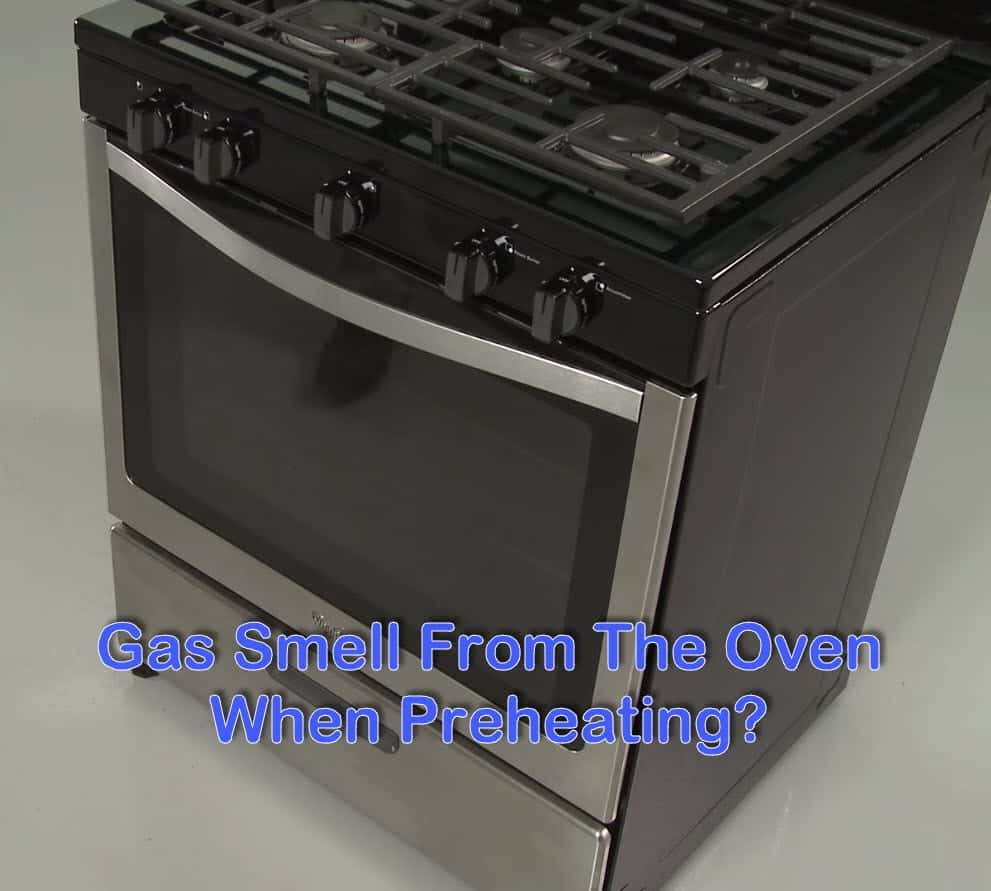 While electric ovens have their own list of problems, one common issue with gas ovens is that you may notice a gas smell coming from the oven during preheating.

So, if it smells like gas coming from the oven during the preheating cycle, most likely it is caused by burnt odorant, which may smell like gas OR weak gas ignitor when it is not able to ignite gas burner in a certain time.

It’s normal to get a “gas smell” from all appliances that run off gas at least sometimes. Essentially what you’re smelling is the odorant, which has a rotten egg smell.

The odorant is an additive that’s mixed with both natural gas and propane. It’s interesting to mention that these gases have no smell when not mixed with the odorant.

Anytime you smell gas it can vary from normal to strong. This will generally depend on how much odorant was added to the gas or propane tanks that supply your home.

You may notice when the smell is concentrated more that your tanks are starting to get low.

On the other hand, if you have piped natural gas, the smell can get strong more often.

This will depend on when and how your gas company is adding odorant to the main supply lines.

Most of the time it’s normal to smell gas when one of these appliances is first turned on. The smell can even be strong at times, but usually goes away after the gas ignites.

If your oven is lighting correctly, you have nothing to worry about.

Yet, keep in mind that if you are smelling unburned gas that resembles rotten eggs, this is not normal. If this occurs, you should immediately do the following things:

If the smell is gas rather than raw or burnt odorant, check the igniter.

In many gas oven models, the igniter is hidden underneath the bottom covering. This is to protect it from direct exposure to food that has boiled over out of the pan and such.

Yet still, food particles and grease can still reach the igniter through ambient air. This, over time, can affect the function of the igniter.

Unfortunately, most gas oven igniters utilize hot-surface ignition, and this makes it hard to clean without breaking or damaging the igniter.

When the glowing ignitor getting weak, it doesn’t provide the right amount of current to the gas valve, and this causes the igniter to only open slowly, thus allowing gas to escape and no ignition to occur in the first seconds.

To begin, you need to disconnect the power source for the oven and shut off the gas supply.

You will also want to remove the oven racks and remove the screws holding the base plate in place so you can remove it.

When changing this part, it’s imperative that you remember what position it is in before removing the old igniter.

The new igniter must be installed in the exact same position.

Once you’ve located the igniter, you’ll start the repair by removing the igniter mounts. Then pull up on the part so you see the two wires. Both of these need to be removed.

In some models, the igniter is secured using wire nuts that also need to be completely removed.

When handling the new igniter, you will want to be very gentle with it. If you accidentally drop it, this could render the part useless because they are very fragile.

When installing the new part, you’ll begin by mounting the igniter and then connecting the wires. This helps ensure the positioning is correct, so you don’t have to worry about where the wires rest.

If your model has a wire nut, and you don’t plan to reuse the old one, make sure you purchase a metal nut – not a plastic one because your oven’s ambient heat will melt plastic.

Once you’ve completed these steps, it’s time to replace the cover and the racks inside the oven. Reconnect the power and gas, and test the oven.

With a new igniter in place, the oven should ignite during the first 15-30 seconds, and there should be no gas smell.

You’ll more than likely hear the hiss of the gas, and possibly a few clicks.

Keep listening because you should hear a “whoosh” sound that tells you there is proper ignition.

If for some reason your oven still won’t ignite, you’ll need to check the gas ports.

If you’ve never cleaned them (or if it’s been awhile), they probably aren’t releasing enough gas to provide fast ignition.

At this point, go ahead and clean the ports to see if it makes a difference. If you still smell gas during the preheating cycle, you may want to check for gas leaks.

As we mentioned smelling gas when first starting your appliance is normal up to a certain point.

However, if you know there is an issue it’s best to stop using the stove and oven until a repair has been made.

Though these appliances have built-in safety features, it can cause more harm than good to continue using them.

Do you currently have a gas oven that you’ve smelled gas coming from during preheat? If so, what was the problem and how did you fix it? We’d love to hear your thoughts, so comment below and let’s talk about it!