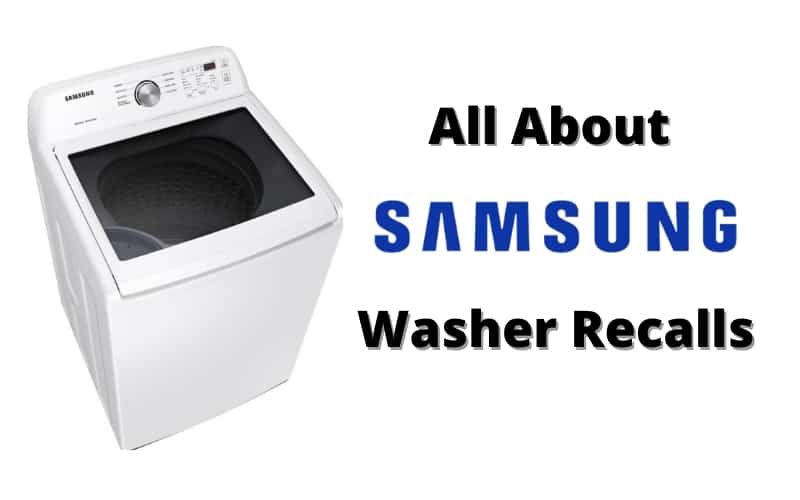 If you own a Samsung washing machine, it’s important to keep an eye on the recalls issued by Samsung.

You should periodically check your machine to ensure it is not the subject of either a manufacturer recall or a class-action lawsuit brought against Samsung.

A class-action lawsuit was brought forth against Samsung in 2016 for top-loading washing machines manufactured between March of 2011 and October of 2016, and sold in the United States, resulting in a compensation and rebate program for owners.

Why have some Samsung washers been recalled?

A number of Samsung washing machines have been the subjects of company-issued recalls due to the risk of impact injuries.

These injuries are associated with the lid unit of top-load washing machines. Samsung offers refunds, replacement, repair for all affected units.

Machines manufactured between March of 2011 and October of 2016, and sold in the United States, are subject to the company-issued recall.

According to the Consumer Product Safety Commission, the lids of the top-loading washing machines pose a risk of injury.

In some cases, these lids detach from the body of a washing machine while it is in use.

The detached lid then results in a projectile risk if the force of the spinning drum propels the lid across a room or within a confined space.

This is particularly problematic in the presence of water heaters, gas lines, people, and for pets.

Samsung washing machines made from March 2011 to October 2016 have the potential to eject dangerous projectiles.

The lid at the top of the machine can become loose because of the imbalance of the chassis, making it possible that the machine could not only “explode,” but could also sling the drum out of the machine.

In short, the machines themselves are not igniting in an explosion, as the imagery of an explosion suggests; however, the risk of projectile injury is serious and can be life-threatening.

Even in the case that a projectile unit doesn’t come into contact with a living thing, it is possible that the unit can cause indirect damage if it impacts a water heater (leading to an explosion of that unit), or a gas line (potentially leading to a life-threatening leak).

Owners of affected units, or units that they may suspect are affected by the manufacturer recall, should be sure to check their model number and serial number against the recall list.

Which machines are affected?

Model and serial numbers can be located on the back panels of individual machines.

How to find the model and serial numbers of your machine

To find the model and the serial number of your Samsung washing machine perform the following actions:

Owners should cross-check their unit model and serial numbers to the United States Consumer Product Safety Information website. If you are unable to locate the model and/or the serial number of your potentially affected unit, you can reach out to Samsung’s customer support through their 24/7 online chat platform in order to speak to a representative.

This comprehensive list will allow owners of potentially affected machines to verify whether or not their unit has been the subject of a manufacturer recall.

Since new recalls can be issued at any point, it’s important to double-check your machine even if it doesn’t appear on this list.

You can check your unit on the United States Consumer Product Safety Information website.

Affected units of the 2016 recall include:

A class-action lawsuit is brought forth when a large number of people suffer the same (or similar) injuries as a result of the same wrongful act of a company or the same defect of an existing product.

Although an individual can sue a large company, such as Samsung, it is often ineffective to do so financially.

However, if several people face the same harm, a case against a large company can be brought forth and might be strong enough to result in legal mitigation of the harm.

Because the drums of washing machines detach from the internal chassis, and because in at least some cases these projectiles caused harm, a class-action lawsuit was brought forth against Samsung in August of 2016.

The affected individuals totaled 773, as reported by Samsung. The recalls for affected units were issued in the following November of that year.

If your washing machine is on the recall list and you choose to replace the unit, you are entitled to a one-year extension of the manufacturer warranty for your new unit, a rebate toward the purchase of that unit, and potentially a credit toward an upgrade.

Although Samsung does not publish the details of their rebate program on their website, they do claim that the rebate amount is related to the unit model and the date of manufacture.

Rebate options differ depending on the model number of your unit. If your machine is on the recall list, you’ll have to file a customer support claim for your machine.

Customers who purchased a recalled unit after October 6, 2016, when the units were supposed to have been pulled off the market, are entitled to a full no-questions refund.

If you find that you are entitled to compensation, you can claim the manufacturer rebate by contacting Samsung’s customer support through their 24/7 online chat platform.

Finally, if you purchased a machine that you know to have been on the recall list, but you have since sold or otherwise gotten rid of your machine, you may still be entitled to compensation per the recall policy.

You will need to apply for the enhanced minimum recall rebate on the settlement website.

If you are seeking a refund, repair, or replacement for your affected Samsung washing machine manufactured between March 2011 and October of 2016, you should contact Samsung’s customer support line directly.

Here, you can speak directly with a customer support specialist who can help determine the best course of action for your particular scenario.

If you choose to repair your machine

If you choose to repair your machine, rather than replace it or receive a refund, you have a few options.

First, you can hire a third-party vendor that you choose on your own.

Second, you can hire a third-party vendor through Samsung’s preferred vendor platform. (The Samsung website has an option to do so.)

Third, you can drop your unit off at a Samsung repair location and retrieve it when the repair is complete.

If you choose to seek a refund

If you choose to seek a refund, you can complete that process through Samsung’s customer support chat feature on their website.

Keep in mind that their rebate program means you might be entitled to more than one form of compensation.

If you choose to replace your unit

If you choose to have your unit replaced, you can reach out to Samsung on their chat platform, and arrange a pick up of your existing (defective) unit and the delivery of a new unaffected model.