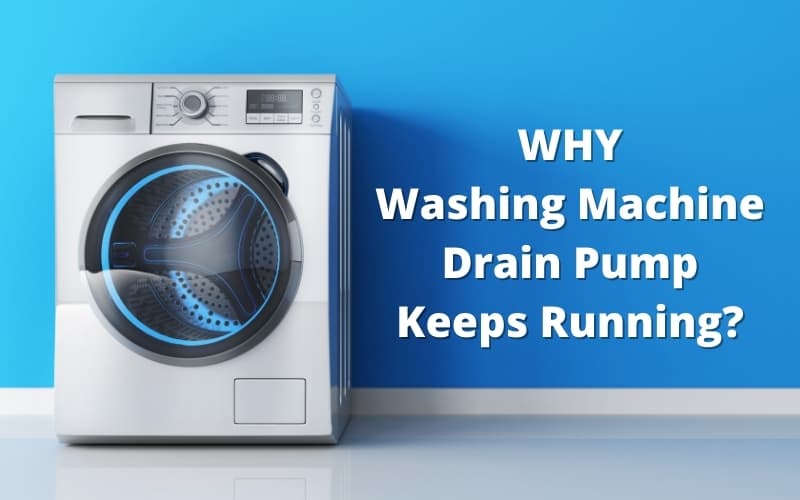 The washing machine is arguably one of the most vital appliances in a family’s home. If it stops working correctly, it could disrupt an entire family’s routine!

One problem that often plagues homeowners is when the drain pump keeps running for no apparent reason.

Suppose your washing machine drain pump keeps running. In that case, it could result from a damaged control board, a faulty drain pump, or a defective water level switch. A broken water inlet valve could also be the culprit, or you may find that your drain hose is clogged or placed too far into the standpipe.

In this article, we’re going to explore each of those possible reasons to help you get to the bottom of this issue!

What it is: Most household appliances these days rely on what’s known as a control board. That is a small circuit board with several devices, switches, and other components that serve as the brain for the appliance in question.

Your washing machine also has a control board, and its job is to regulate all of your washer’s different functions.

First, you’ll input all of the settings you want to use to wash your load of laundry. That includes temperature, time, spin cycles, and so on.

Once you do that, the control board takes over to coordinate all components’ actions, including the drain pump, clean your clothes thoroughly and then remove most of the water.

Why it fails: Your washer’s control board is like its brain. So, suppose something was to go wrong with one of the numerous components on the board. In that case, the washing machine will start to behave unusually.

There are many ways a control board can get damaged. For starters, the manufacturer that put it together could have overlooked some mistakes and given you an inferior control board, to begin with.

Beyond that, factors such as the environment and age could also lead to a damaged control board.

Power surges and water seepage within the washer unit could damage the components on the board.

And, of course, having served you for many years, an older washer’s control board could’ve simply worn out.

In this situation, a damaged resistor on the washer’s control board could cause it to mistakenly keep the drain pump running, even though there’s no need for it to do so.

How to fix it: When it comes to the control boards, the most common advice you’ll get is to replace the board entirely.

That is probably the most straightforward way of resolving the issue quickly so you can go back to using your washer as you usually do.

However, you could also address whichever tiny component on that control board which is faulty or damaged.

You may save a little money this way, but you’ll need to know how to repair a control board or know of a company that can do it for you.

What it is: To clean a load of laundry, a washing machine needs to go through several stages or ‘cycles’.

All of it begins with the washing filling the drum with water. The drum will then spin around to agitate all of the dirt to come out of the clothes inside.

Finally, all of that water needs to be drained out of the washer as efficiently as possible.

That’s why your washing machine has a drain pump that’s dedicated to that last stage, the drain cycle.

When the washing cycles are complete, the drain pump will activate and remove almost every drop of water from the washer and push it out through the drain hose.

In doing so, you’ll find that your freshly-washed clothes will carry minimal moisture so you can dry them much quicker.

Once the drain pump has done its job, the washing machine is ready to help you wash your next load of laundry.

Why it fails: Just like any other component in the washing machine, the drain pump can also fail.

Here’s where it gets interesting: it can malfunction in one of two ways.

Firstly, a faulty drain pump might simply fail to turn on, leaving your washing machine full of water and unable to finish cleaning your clothes.

However, in this situation, the drain pump can also fail by being permanently stuck on.

There’s a chance that it might be grounding out, making it run even when there’s no more water for it to drain from the washer.

Now, you could replace the drain pump by yourself as a DIY job. Getting a replacement pump and the instructions to replace it is simple enough. All you’d have to do is refer to your user manual or find instructions online.

But that’s only one part of the problem. If the drain pump is malfunctioning because of an electrical problem, then you’ll need expert help.

Diagnosing an electrical issue can be difficult and dangerous, so it’s best to leave it to the professionals.

What it is: How does a washing machine know when to add more water or to empty itself out? Well, it does that with the help of something called the water level switch.

As the name suggests, this component only has one job to do. And that is to ensure that there’s a correct amount of water in the drum (or tub) so that it can go through the various washing cycles.

The water level switch works by measuring water pressure. As the washer gradually fills up with water, a small amount of air inside the switch will become compressed.

When it detects that there’s enough water in the drum, it’ll stop letting any more water come in.

This component also works the other way around. Suppose it detects that the washer is overflowing, for whatever reason. In that case, it can also control the drain pump to empty water out of the machine.

The switch may mistakenly think that the washing machine is overflowing with water, and so it’ll activate the drain pump to empty itself out.

This will go on non-stop, which is why you’ll notice your drain pump continuing to run even when the washing machine is completely empty.

How to fix it: You can resolve this issue by replacing the water level switch yourself.

As usual, be sure to disconnect the power and water supply to the machine before removing any panels or replacing any of its parts.

The best way to locate the switch on your washer is to refer to the user manual. Still, you can usually identify the water level switch very quickly.

Unlike any other switches you may find inside your washer, this one has a small hose connected to it.

That hose is where the air gets compressed when the drum is full of water, as described earlier.

Before disconnecting the old switch, you can make things easier by taking a photo of it. That way, you’ll have an image you can refer to while you install the new switch exactly the same way as the old one.

What it is: The component that controls whether or not water flows into your washer is known as the water inlet valve.

This valve works closely with other parts like your control board and the water level switch to fill up the drum with enough water to begin the washing cycle.

As soon as there’s enough water, the inlet valve will close, and the machine can begin washing your load of clothes.

Why it fails: So, how does the water inlet valve cause your drain pump to run non-stop?

Suppose your washer is currently going through a draining cycle. The washer will keep its drain pump running for as long as necessary, only shutting it off once there’s no more water left in the drum.

Suppose the water inlet valve is broken and not working correctly. In that case, it could continue to let water flow into the washer even as the drain pump is working hard to empty it at the same time.

So, as you can see, this creates a never-ending loop. Water flows into the washer, and the pump keeps doing its job by draining all the water out.

The washer gets stuck in the drain cycle and won’t stop until you shut it off manually.

How to fix it: Replacing the water inlet valve is relatively easy. The difference between this and many other components is that you’ll have to deal with both electrical connectors and hoses.

So, as usual, keep your user manual handy so that you can locate the water inlet valve on your washer.

Also, disconnect the water and power supplies before opening any panels and working inside the unit.

The water inlet valve is bound to have some water left inside of it, so you’ll want to put a cloth down somewhere underneath it to catch anything that comes out.

Be sure to take a photo of the connections which you can use as a reference when you install the new water inlet valve.

Drain Hose Is Placed Incorrectly Inside the Standpipe

What it is: All washing machines have a drain hose connected to its back or side panel.

When the washer begins its drain cycle, the drain pump will turn on and send water from the washer out through that drain hose.

Quite often, that drain hose leads out of the washer and into a standpipe. The drain hose must be inserted inside the standpipe at the correct length.

If not, it won’t drain all that water from the washing machine efficiently.

Only about 4.5 inches of the drain hose should be inside the standpipe. Plus, the hose shouldn’t be taped to the standpipe, as it needs airflow to help the water flow smoothly.

Why it fails: If the drain hose is incorrectly positioned, or if it’s clogged in any way, the washing machine will struggle to drain all of the water out completely.

As a result, you’ll notice that the drain pump keeps on running, either indefinitely or for much longer than it should.

A clogged drain hose is easy to identify. The tricky part is in ensuring that the drain hose is placed at a correct length inside of the standpipe.

How to fix it: If your drain hose is why the drain pump keeps running, then it’s an easy fix.

In most cases, the cause of a drain pump running unnecessarily is a fault in the control board. But before you spend your hard-earned money replacing it, be sure to rule out all the other possibilities first.