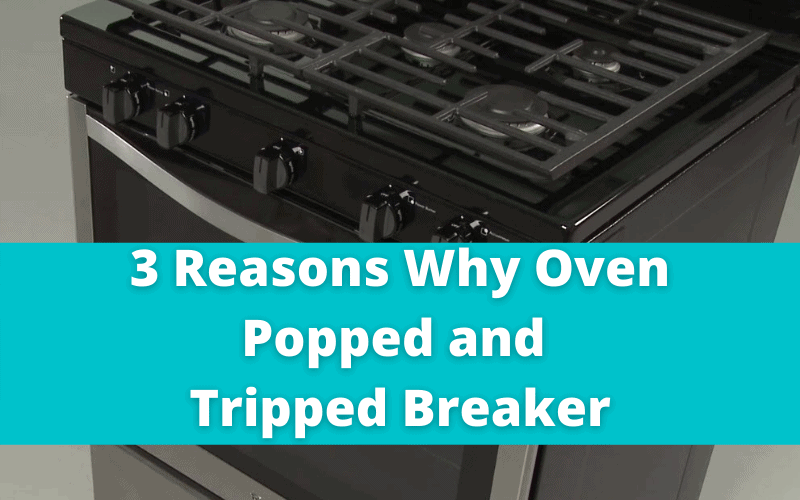 Electric ovens are valued for a long list of reasons, especially in terms of safety. The absence of gas combined with several safety features, all come together to make users feel much safer.

So, imagine how terrifying it could be to hear your electric oven pop and cause the breaker to trip! What could be the reason? Is it really that bad?

Well, an oven may pop and trip the breaker if the control board relay is stuck and shorts out, if the bake element burns out, or if there’s an exposed wire on the bake element that creates a short circuit.

In this article, we are going to look very closely at these possibilities, what negative outcomes they may cause, and how to fix the problem.

With quick troubleshooting, you’ll be able to resolve the issue quickly and get back to enjoying the benefits of your electric oven!

Control Board Relay Stuck And Created A Short Circuit

What is it: Inside your electric oven, there’s a component called the control board which typically has several relays on it.

You can think of this as the heart of your oven, as those relays control how and when power is directed to all of the other components inside your oven, including the heating elements.

Here’s an example of how it works. Let’s say that you input your settings into the oven’s control panel.

Afterwards, those control board relays will open and increase the voltage to the heating elements, causing them to become hot enough to cook the contents of the oven.

That will continue for the duration that you’ve set, after which those relays will stop sending power to the heating elements.

When it does, it’ll allow the elements to cool down and prevent your meal from overcooking or burning.

Why it fails: Even though the control board relay itself is small, it can cause massive problems for your oven.

You see, the relay can find itself stuck closed, because relay contacts been overheated, due to the high current coming through it and welded together.

That can lead to a short circuit, a burning smell, and even smoke coming from the oven.

The pop that you hear may come from whichever component is shorted out as a result of the stuck control board relay.

It could also come from any of the wires that have shorted and burned out as well.

As for the circuit breaker tripping, that happens when it senses that the circuit is being overloaded. It trips to cut power and prevent electrocution or fires from happening as a result.

How to fix: The best way to resolve this issue is to simply replace the oven control board. 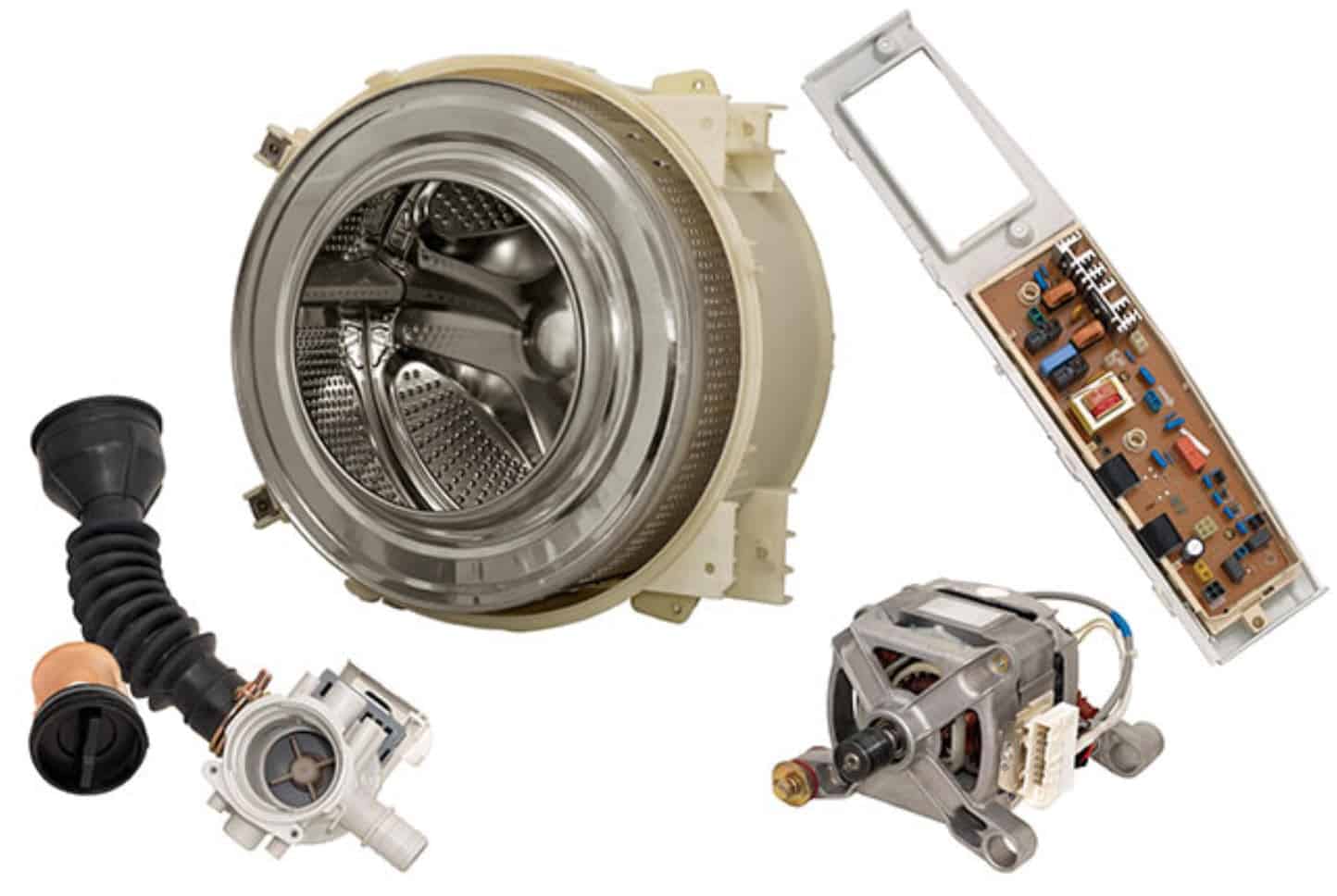 Search Now
Learn More
We earn a commission if you click this link and make a purchase at no additional cost to you.

Fixing individual relays may not be a practical solution for most people.

To start with, be sure to refer to your user manual and ensure that you’re purchasing the correct part.

That way, you can rest assured that the control board you receive is indeed compatible with your oven’s make and model.

Suppose you decide to replace the control board yourself. If that’s the case, then always start by disconnecting the power supply to your oven.

Typically, you’ll need to remove a panel to access the existing control board.

Seeing as how the precise location may differ according to the oven make and model, it’s always best to refer to the user manual to find yours.

You’ll know that you’re on the right path when you see your control board.

It’s a small circuit board with plenty of smaller components on it and electrical connectors all around.

Be sure to take a quick photo of the board to use as a reference for later when you’re replacing the connectors on the new circuit board.

Disconnect all of the wires and remove the screws that keep the control board in place.

Then, using that reference photo you took earlier, and reattach all of the connectors the same way.

Replace the panel that you removed earlier, and test the oven to ensure that everything works correctly.

Bake Element Has Burned Out

What is it: When you look inside your electric oven, you’ll notice that it has at least one or two heating elements.

Also known as the ‘bake element’, these are located at the top and the bottom of the oven to deliver all-round heat to whatever’s cooking inside.

When you input your settings through the oven’s control panel, power will flow through the bake element, causing it to generate heat.

That will continue for whatever duration and at whatever temperature that you have set.

Why it fails: The problem with the bake element is that there’s always a chance of it burning out.

That may happen in the blink of an eye, causing that very loud pop that you may have heard coming from your oven.

Electricity will continue to flow through the bake element once it’s burned out, which is why the circuit breaker may sense a problem and trip as a protective measure.

The breaker does this to prevent anything terrible from happening, such as an electrocution injury or fire in the house.

Another telltale sign of a burnt out bake element is smoke and a burnt smell coming from inside the oven itself.

Burn marks along the length of the bake element will also help you confirm this.

How to fix: Thankfully, fixing this problem is relatively straightforward.

Firstly, you’ll want to refer to the user manual or check online to identify the correct replacement part for your oven’s specific make and model.

If you’ve decided to replace it yourself, you should always disconnect the power supply to the oven before doing anything.

You may need to remove the mounting plate and any screws that keep the bake element in place.

Once that’s done, you can disconnect the bake element. Remember: the element is connected in two places, so you’ll want to disconnect it at both points.

Bake Element Has An Exposed Wire And Created A Short Circuit

What is it: Inside the bake element is a wire. As electricity passes through the heating element, it’s actually passing through the wire inside which generates a lot of heat.

The more power the oven supplies to the bake element, the more heat it generates to cook the food items that are inside the oven.

The wire inside the heating element must never be exposed because it can cause damage, or worse, it could electrocute you if you were to touch it with your bare hands. That’s why it’s housed inside the bake element.

Why it fails: Unfortunately, there are scenarios where the wire inside the bake element can get exposed.

It could be that the bake element is of poor quality, or perhaps something hit it hard enough to crack the outer layer and expose the wire inside.

Remember: that’s a live electrical wire inside of the bake element. If it’s exposed and comes into contact with other parts of the oven, it could cause a short circuit.

That could be the reason for the loud pop that you hear in the oven.

Thankfully, an exposed wire is somewhat easy to identify just by looking at the bake element.

As mentioned before, if the circuit breaker senses that the oven is suddenly drawing a greater electrical load than it’s supposed to (because of the short circuit at the bake element), then the breaker will trip.

In doing so, it breaks the circuit to prevent electricity from flowing and causing problems such as a fire or electrocution.

How to fix: Resolving this issue is pretty straightforward: you just need to replace the bake element.

After all, that’s a much more practical solution rather than trying to fix a damaged heating element, especially if it has an exposed wire.

While it’s always best to refer to a qualified technician, you could also replace the bake element yourself as it’s a fairly straightforward process.

But given that this involves an exposed wire, you must practice plenty of extra caution.

So, before you do anything, disconnect the power supply to the oven.

There’s no such thing as being ‘too’ careful, so you should also put on a pair of rubber insulated gloves if you have them.

Next, remove the mounting plate and any screws holding the bake element in place.

You’ll need a screwdriver for this part of the process. Once those are off, you can then disconnect the baking element.

Remember: the element is connected in two places, so you’ll have to disconnect it at both ends.

Then, put the new bake element in and secure it in place with the screws and mounting plate.

Reconnect the oven to its power supply and test it to make sure that the new bake element is functioning correctly.