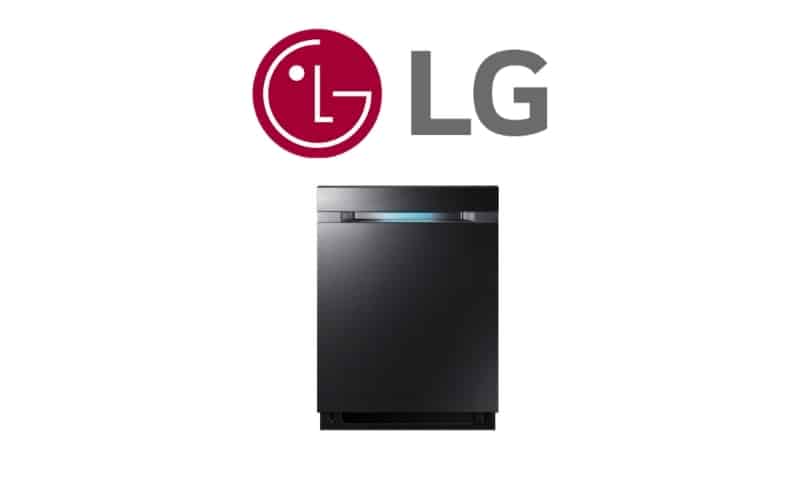 LG is a leading appliance manufacturer with popular dishwashers. However, their dishwashers are prone to problems and breakage like any other appliance.

To find out about the five most common problems of LG dishwashers, read on.

The most common problem of LG dishwashers, and dishwashers in general, is that the dishwasher does not drain.

Whenever there is an issue with your LG dishwasher draining, you will see the OE Error Code appear on your dishwasher’s display.

Typically, this error code is easy to fix and should not cause you to panic.

Most of the time, this error code appears from either clogged food or an installation issue. It is easiest to check for food debris first.

Begin by inspecting your dishwasher for any large food debris. Look around the spray arms, filters, and impellers.

Once you have cleaned out everything manually, try running the dishwasher to see if that helped.

Run a regular or heavy-duty cycle with no dishes or detergent. This will allow you to flush out the unit and test the drain function.

If the drain is still not acting properly, then you should check the drain hose. A drain hose can become kinked whenever something pushes against it.

The drain hose will be under the sink. Straighten the hose if it is kinked or there is something pressed against it.

Another common problem with LG dishwashers is that the dishwasher’s wash motor fails.

This will cause an LE Error Code to pop up on your display screen.

There are two reasons that this error code will pop up on your display: either the wire loom is caught in the insulation or the sump assembly is no longer operating properly.

If the LE Error Code is appearing because the wire loom is caught in the insulation, then you simply need to put a piece of soft, Teflon material between the wire loom and insulation panel.

This will prevent them from getting caught and breaking in the future.

However, this error code also indicates a bad sump assembly. If this is the problem for you, you will need to install a new sump.

Remove the old sump and replace it with a new one.

You will do this by disconnecting electrical connections, undoing all of the assemblies, removing the spring compression clamps, and unscrewing the holding clamps.

Once the old stump is removed, install the new one in the reverse order.

Once it is in place, reassemble the entire dishwasher and place it back into its compartment underneath the counter.

Many LG dishwasher owners complain that their dishwasher does not turn on.

The most common reason for this issue is that the noise filter malfunctions.

This causes the dishwasher to seem like it has no power and not respond to any buttons used on the control board.

If this is the case for you, then the only way to fix this problem is to replace the noise filter in the dishwasher. Luckily, this process is relatively easy.

The first thing you should do is check the breaker in your home’s main power panel.

Make sure that it is placed on or that the wires are not tripped. This could be an easy fix to the problem.

To make sure that power is actually getting to your dishwasher, use a screwdriver to remove the two screws holding the bottom cover on and remove the screw holding the cover on the power box.

Use a multimeter to check the voltage between the white and black wires. If there is voltage, then the noise filter is surely to blame. Turn the breaker off.

With the breaker off, open the dishwasher and access the inside front panel.

Use a multimeter to check the fuse for continuity, meaning that it should show zero.

If the fuse is bad, then you need to replace the control board too.

Remove the dishwasher from under the counter. Locate the noise filter assembly and disconnect the wires.

Unscrew the screws. Shift the noise filter to the right to pull it out. Now, install the new noise filter in its place. Reassemble your dishwasher.

4.     Dishwasher Leaking On The Floor

Another common problem of LG dishwashers is that they can leak on the floor, which wastes water and can cause water damage.

The most common reason for this problem is a broken water valve.

Begin by disconnecting the appliance. Then, remove the water valve underneath the dishwasher.

Now, connect the water hose to the new water valve. Install the electrical harness around the valve and put it in place by reinstalling the screws.

Reassemble the rest of the dishwasher.

Finally, the last common problem associated with LG dishwashers is that the dishwasher leaks water into the drain pan, which triggers the flood switch.

When this happens, an AE Error Code will pop up on your display.

Often, this problem is due to a broken lower spray arm, which can be difficult to detect

It is most difficult to determine whether or not the leak is being caused by a broken lower spray arm since you cannot see how the spray arm functions while the dishwasher is running.

You will want to check for any scratches, cracks, or damage, but some of the damage will be difficult to see with your eyes.

To fix this problem, you will need to install a new lower spray arm. Begin by removing the faulty spray arm using a screwdriver.

Then, simply install a new lower spray arm in the place of the old, broken one.

Other causes of this code include:

To figure out the cause of the leak, begin the wash cycle, and see where the water is exiting the dishwasher.

If the water exits into the overflow drain port, then you can expect the issue to be the door seal or the broken lower spray arm.

We hope this article has helped you to diagnose and fix your LG dishwasher.

Always remember to be smart and safe when fixing your dishwasher or any other appliance for that matter.

Always begin by unplugging the appliance from the outlet and disconnecting the water source.

4 thoughts on “5 LG Dishwasher Problems You Need To Know”