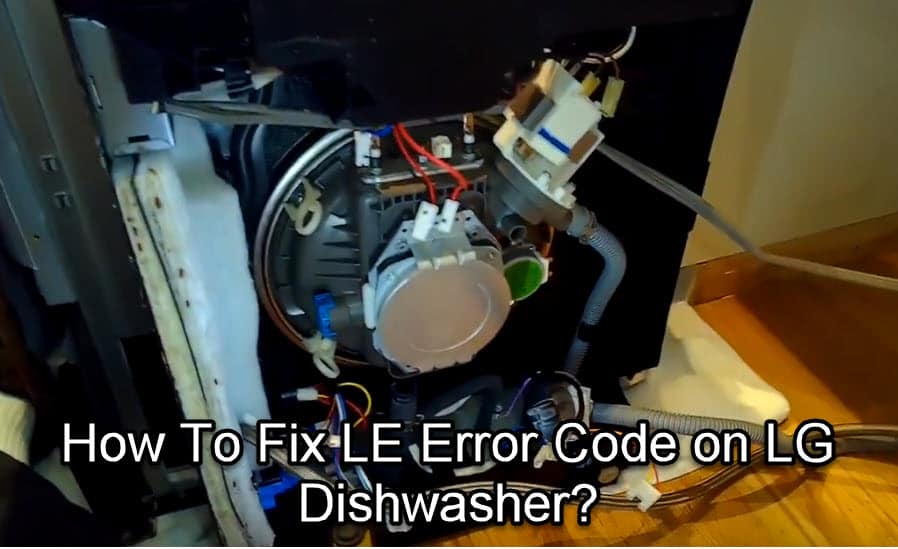 How To Fix LE Error Code on LG Dishwasher?

Preparing the Dishwasher for Discovering the LE Error Code

There are two common reasons that you might experience this LE error code on an LG dishwasher. The first issue is the wire loom will get caught up in the sound dampening material (insulation), which helps reduce the noise levels while your dishwasher is operating a full cycle. The soft insulation material can trap the wires in place, and this can cause some of the wires to break over time.

If the issue is a bad sump assembly, you’ll begin by

You’ll hear the dishwasher beep when it attempts to drain the water, and you’ll see the LE error code. If this is what’s causing the error code, the only solution is to replace the sump assembly parts.

You’ll lay the dishwasher on its side, take off the screws and bottom plate. You’ll then

Although it does not require various specialized tools or equipment to remove the sump assembly, you will have to undo the plumbing lines. So, if you have no experience in this area at all, or if you do not feel comfortable doing so yourself, it might be a good idea to hire a licensed LG technician to do the work for you instead.

Once the sump assembly is replaced, you might also choose to add a teflon panel between the wire loom and insulation board, to prevent that issue from occurring in the future. It is a precautionary measure which will take a few extra minutes to complete, but it will prevent the LG dishwasher error code LE from popping up in the future.

Dryer, How To, Repair

5 Common Issues When Dryer Not Spinning

Dryer, How To, Repair

What To Check If Your Dryer Keeps Tripping Breaker?

Eugene Smith, 3 months ago 5 min read
How To, Repair, Washer

Eugene Smith, 5 days ago 7 min read
Dishwasher, How To

Why does my Dishwasher Smell?

Eugene Smith, 6 months ago 7 min read
How To, Repair, Washer

5 Reasons Why Your Samsung Washer Not Spinning

Eugene Smith, 4 months ago 3 min read
How To, Know How, Washer

[Solved] Samsung Washer SUD or 5UD error code. How to fix it?

Eugene Smith, 4 months ago 5 min read
Cleaning, How To, Washer