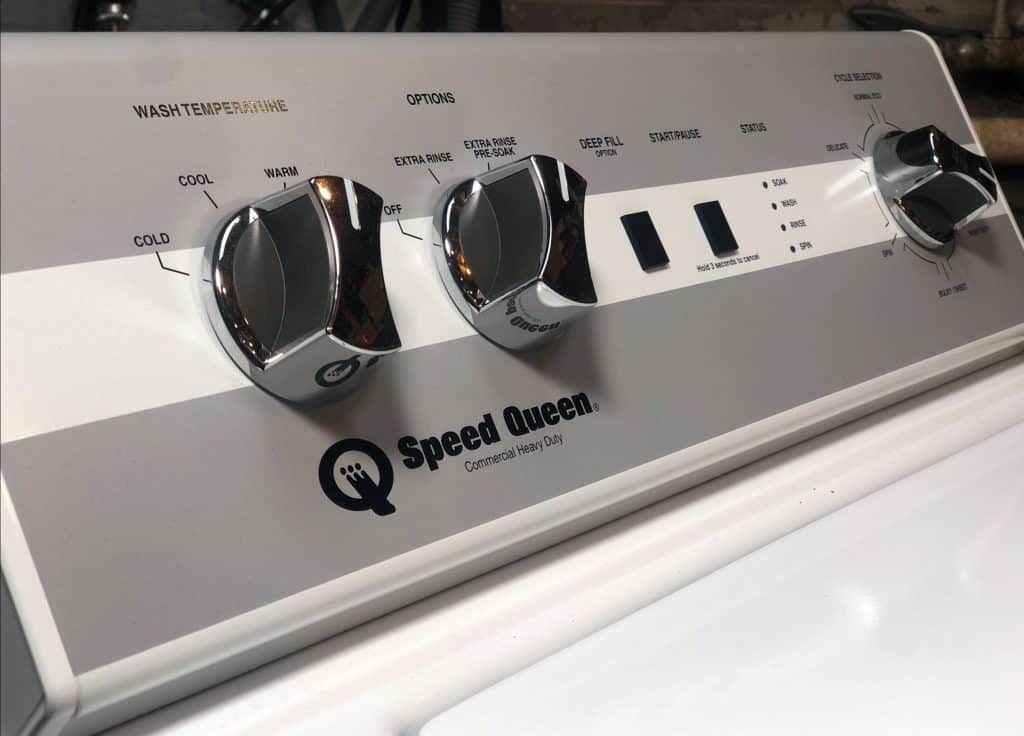 Speed Queen is a well-known brand that produces commercial and household laundry machines. In this article, we’re going to see what those common problems may be and how they’re solved.

Common problems with Speed Queen washers include the washer not draining, not filling with water, not spinning fast enough, stopping mid-cycle, or causing excessive noise.

The good news is that these common problems have solutions. So, we’re going to explore common Speed Queen washer problems and how to fix it.

To start this list, we’ll look at a common problem that tends to happen with top-loading Speed Queen washing machines.

We’re talking about the question of why the washer is not draining as it should. Typically, the root cause behind this issue is a problematic drive belt.

What it is: Among all the parts in a Speed Queen washing machine, the drive belt is undoubtedly one of the most important.

The belt works closely with pulleys and the drive motor to spin the washer fast enough to do its job effectively.

Whether it’s agitating the stains out from your clothes or spinning the clothes dry, the drive belt is there every step of the way. The drive motor will deliver power by turning the belt, passing it on by turning the washer’s tub.

That will continue happening back and forth until the entire washing process is complete.

Why it fails: For the belt to work correctly, it’ll require a lot of tension so it can spin the washer with enough power. Over time, though, the belt will start to wear out and lose all of the tension needed to do its job.

Without sufficient tension, the belt can’t spin the washer fast enough. As a result, the washer won’t be able to drain all of the water out of the load of laundry that you’ve put in there.

This problem becomes most noticeable when you put in a heavy load of laundry into the machine.

Without enough tension in the belt, very little water can be spun out of that load and drained out of the tub.

How to fix: Worn-out drive belts need to be replaced, which can be quite a tricky process. So, let’s break it down into two stages: gain access and replace the belt.

On a top-load washer, the belt will be on the bottom end of the unit, requiring you to gain access by removing the panel and any other parts in the way.

Be sure to refer to your particular unit’s user manual for any special instructions on gaining access.

When you can see the belt’s location clearly, you’ll find that removing the old belt is much simpler than installing the new one. That’s because a brand new belt will be taut compared to the old one.

Once you’ve done that, turn the washer manually to ensure that the belt is well-aligned on both pulleys.

Remember: you’ll need to disconnect the power supply before you gain access to replace the belt.

Another common problem you may experience with your Speed Queen washer is that it doesn’t fill up with enough water to wash a laundry load.

There are two possible causes for this, being a fault in the water inlet valve or the timer.

What it is: The water inlet valve on a washer is what controls the amount of water that fills up the washer tub. It opens to let water in but closes as soon as the tub is full so that it doesn’t overflow.

On the other hand, the timer is often seen as the ‘brain’ of the washer. It coordinates all of the different functions in a washer from filling to spinning and draining.

Once you’ve chosen the wash cycle that you want to use for your load of laundry, the timer will take over and ensure that each process happens as it should.

Why it fails: When the water inlet valve is faulty, it could fail to open entirely and let enough water in. That could lead to some water flowing into the tub but not up to the required levels to begin the wash cycle.

Sometimes, the water inlet valve works perfectly fine, but the problem is with the timer.

Remember: the timer will coordinate the different components to do their tasks in the right sequence.

The timer could fail in telling the inlet valve to open, resulting in a lack of water in the tub.

How to fix: Both the water inlet valve and timer aren’t easily fixed, so it’s best to replace them entirely.

Thankfully, doing so is relatively straightforward. Refer to your user manual so you can order the correct replacement for either the inlet valve or the timer.

Examine your timer for any burn spots or smells, as that could be a clear sign that it’s damaged and needs replacing.

You’ll want to start by disconnecting the unit’s power supply before fixing either of these components.

With the water inlet valve, be sure to turn off the water supply as well. Then, place a cloth underneath it to catch any leftover water that may spill out.

You’ll begin by removing the access panel and identifying the part you’re replacing. Typically, a water inlet valve is held in place with a mounting plate and screws. You’ll need to remove those first.

Remove any electrical connectors and replace the old part with the new one. Reconnect everything the same was as before, and replace any mounting screws that you removed earlier.

For a Speed Queen washer to work correctly, it doesn’t just have to spin. It’ll also have to turn at the correct speeds.

Sometimes, you may find that your washer is working, though it never gets up to the right speeds. A problem with the vibration sensor could cause that.

What it is: Washing machines rely on a vibration sensor to figure out if the machine isn’t balanced correctly.

Excessive vibrations are not good for the washer’s contents.

So, if the sensor were to detect that the machine is vibrating too much for whatever reason, it’ll slow the washer down and prevent it from reaching its ideal speed.

Why it fails: On Speed Queen washers, it’s quite common that the electrical wiring to and from the vibration sensor is too brittle.

A wiring problem like this could cause the vibration sensor to malfunction and signal to the machine to maintain a slower spin.

How to fix: Fixing the problem requires a close inspection of the wiring. If there are any cracks or breaks along the line, you might need to solder the wiring and apply a heat shrink to ensure that the connection is improved.

Usually, some users will see that their Speed Queen washer stops working right in the middle of a cycle.

That could be caused by a faulty lid or door switch, especially when the machine is spinning at higher speeds and generating more unusual vibration.

What it is: A lid switch on a washer is there to ensure that the lid is closed correctly while the machine is operating.

The idea is that if someone or something were to open the lid mid-cycle, the machine would stop to prevent any damage or injury.

Why it fails: A faulty lid switch could stop the washer mid-cycle if it were to fail.

While that can happen during any cycle, it tends to happen more often during the spin cycle when the drum is spinning fast and generating lots of vibrations.

How to fix: To solve this problem, you’ll want to replace the lid switch or door switch assembly.

After disconnecting the power, you can remove the access panel and locate the lid switch.

Replacing it takes very little time, as all you’ll need to do is disconnect the power connectors and remove any mounting screws keeping it in place.

Then, work in reverse by placing the new switch in and replacing the connectors and mounting screws.

Finally, another common problem with the Speed Queen washer is when there’s excessive noise coming from inside the machine during a cycle.

Typically, this is a somewhat high-pitch squealing or grinding noise that you’ll notice happen when the washer is agitating or spinning.

If this is the case, you may be facing a problem with the belt or idler pulley.

What it is: The drive belt in a washer connects to two things: the drive motor and the pulley.

The pulley is the part located on the tub or drum itself. One end of the belt wraps around the pulley, transferring the motor’s power and causing the washer to turn.

Why it fails: Just like any other moving part of the washer, the pulley can suffer from regular wear and tear over time.

That wear can appear in the form of cracks or bends which create unpleasant sounds as the pulley gets turned by the drive belt.

One way to test the pulley is to turn it by hand and see if any noises happen again. If it does, it’s a sign that there’s a defect with the pulley.

How to fix: Fixing this problem will require a brand new pulley. You can purchase a belt and idler pulley kit for your Speed Queen washer model and do it yourself, though it involves many more steps than replacing most other parts.

You’ll need to unplug the machine and gain access to the pulley. That may involve removing access panels and the drive belt that you already have.

Typically, the pulley is held down with a bolt that takes a bit of effort to remove. But once it’s off, fixing the new pulley shouldn’t be too difficult.

Once it’s on, you’ll have to work your way backwards and put the drive belt back on as well as the access panel that you removed earlier.

So there you have it. Speed Queen washing machines are some of the best out there.

Once you know the common problems to expect and how to fix them, you’ll be able to get the most out of your washer!