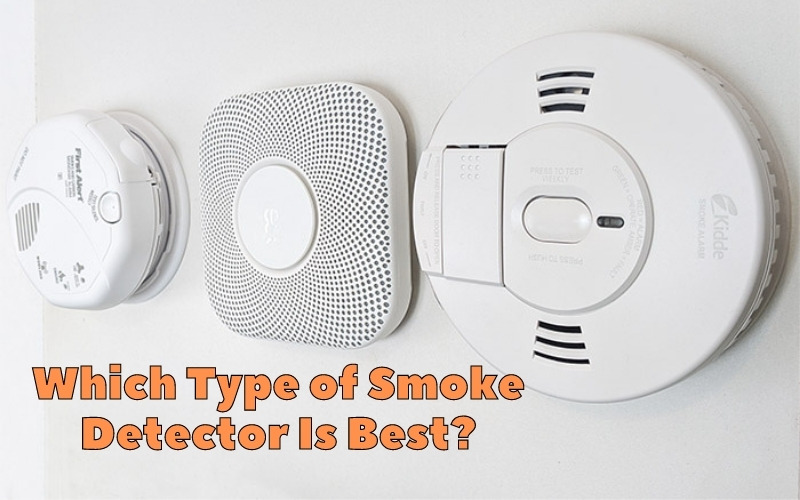 This article will discuss the different methods of sensing smoke within standard detectors and explain how best to keep you, your home, or your building safe from fire.

How the Two Kinds of Smoke Detectors Work?

The primary difference between the different types of smoke detectors is the method they use to sense smoke. A smoke detector is connected to a building alarm system, whereas a smoke alarm includes a detector with a built-in speaker.

There are two methods that detectors use to pick up the signs of smoke:

Let’s look at them in detail.

Ionization detectors use a small, safe amount of radioactive material to produce a current within the detector. When smoke enters the detector, the current is disrupted, activating the alarm.

Ionization detectors tend to be less expensive than photoelectric detectors and are more common. The National Fire Protection Association estimates that approximately 90% of smoke detectors in the United States use ionization.

Ionization detectors are generally faster at picking up smoke from flaming fires. These are fires that have large, noticeable flames, but not all fires start this way. They also give more false alarms, such as from cooking.

Photoelectric detectors use a light source within the detector. When smoke enters the detector, it scatters the light around the inside. The photoelectric cell picks this up and triggers the alarm.

While less common, photoelectric detectors are more effective at sensing smoke from smoldering fires. These are more gradual fires that you can’t see straight away, such as from fireplace embers or cigarette butts.

The US Fire Administration has stated that although varying differences have been found in full-scale fire tests, it cannot recommend one type of detector over another. Instead, it is better to have both detectors or a dual detector system, as it is impossible to predict what kind of fire will start.

A dual detector will be more expensive but safer overall. The quantity and location of your detectors relative to the size of your home or building are also very important to ensure complete coverage.

Fires can start from both smoldering and flaming sources. However, it is well known that smoldering fires are more deadly because smoke and gases can build up over time and remain unnoticed.

Fire departments often recommend that all homes have at least one photoelectric detector on each level of the building, as this is the type of detector best detects smoldering fires.

If you can only get a detector with one type of smoke detection, you should aim for photoelectric. However, the optimal choice remains the dual-detector.

Read: LG Microwave Not Working But Has Power – Troubleshooting Guide

As well as detection type, you need to consider whether to use a wired or unwired system in your building. This will determine whether your detector uses a battery or is wired to your electricity supply.

Both ionization and photoelectric smoke detectors can be wired or unwired, so this is an additional consideration.

They are also interconnected through the wires in your home. This means that if there is a fire in one part of your home, all alarms will be activated.

This is a huge benefit. If a fire starts in one area, and people are sleeping or in another room where they can’t hear the fire, then they will still be alerted.

The main drawback is that if you don’t have knowledge of electrical wiring, you will need to hire an electrician to install wired detectors at an additional cost.

Unwired smoke detectors are powered by a battery. This can be either a standard AA or 9-volt battery, which will need to be replaced at least once a year, or a lithium battery which can last up to ten years.

These will be easier to install and change yourself, as you will not need any in-depth knowledge about wiring. However, there is a risk of the battery going flat without you noticing, leaving the unit useless in a fire.

Some battery-powered units can still be connected without wires using wireless radio systems, but these are less reliable than wired systems.

Read: Why Samsung Microwave Vent Is Not Working?

The Best Energy Source for Your Smoke Detector

Despite the installation cost, wired smoke detectors are widely reported as superior in reliability and safety to battery-powered detectors.

When smoke detectors are interconnected and located on all floors of a house, they greatly increase the chance of both fire detection and alerting inhabitants of the fire.

Now, let’s look at how many smoke detectors you should use and where you should install them.

If you are wondering where you should be installing your smoke detectors, it will largely depend on the number of sleeping rooms and the number of floors in your home.

You may think this is more than necessary, but many fires go unnoticed at night when people are asleep. This setup will ensure a high level of safety in all areas of the house and at all times.

If a floor does not have a sleeping area, you should then place detectors in the main living area of that floor or closest to the stairs leading to an upper level. Basements should also have detectors close to stairs.

When installing detectors near kitchens, you should locate these at least ten feet (three meters) from your cooking appliances to make sure you keep false alarms to a minimum. People often disconnect their smoke detectors when false alarms happen too often, and this increases the danger of a real fire going unnoticed.

Think About Where Smoke Travels

Remember, smoke rises. Make sure your detectors are placed high near the top of walls or on ceilings to maximize the chance of detection. Keep your detectors unobstructed and preferably away from doors, windows, and other openings where airflow affects the smoke.

Read: How To Stop Smoke Detector From Chirping Without Battery?

As discussed above, battery-operated units will require new batteries after a while. Even wired smoke detectors may have issues with their electronic parts that prevent them from working.

If you need to replace your batteries, check the manufacturer’s information to make sure you install the right kind of battery.

You should test your detectors at least once a month to make sure they are working. All smoke detectors have a test button on them, which will emit noise when the unit detects smoke.

In general, you should replace your smoke detectors every ten years, regardless of what type of detector you have—even if it’s wired.

Research has shown that the best type of smoke detector is the dual ionization and photoelectric detector. It offers the highest chance of detecting all kinds of fires.

You should also choose a wired smoke detector system for your home. This increases the chance of all inhabitants being alerted to a fire and is less likely to stop working—for example, due to a flat battery.